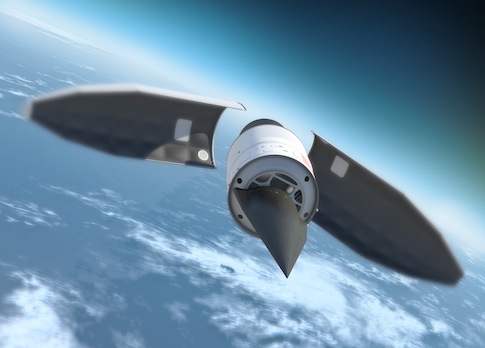 The Chinese dragon continues to breath fire and progress towards war with the US. The latest salvo involves China’s military conducting the first flight test last week of a brand-spanking new ultra-high speed missile vehicle that is quite capable of delivering warheads with prejudice right through our missile defenses. The Pentagon has issued a warning over it. But, it would seem, that the powers that be in our government aren’t worried of no plastic explosives or nothing. While the Chinese prepare to extend their kingdom, Americans are being distracted by gopher-dancing politicians.

The test took place on January 9th. The weapon has been crowned the WU-14 by the Pentagon. I call it fast death. The hypersonic vehicle is a major leap forward for China in their stealth war against the US. You know… the one with the secretive strategic nuclear and conventional military and missile programs that we won’t even discuss, much less prepare for. It’s not a matter of if China will attack, it’s when.

From Bill Gertz at the Washington Free Beacon[2]:

The new hypersonic vehicle was detected traveling at extremely high speeds during the flight test over China, said officials who discussed some details of the test.

The hypersonic craft appears designed to be launched atop one of China’s intercontinental ballistic missiles, and then glides and maneuvers at speeds of up to 10 times the speed of sound from near space en route to its target, the officials said.

A Pentagon spokesman confirmed the test but declined to provide details.

“We routinely monitor foreign defense activities and we are aware of this test,” Marine Corps Lt. Col. Jeffrey Pool, the spokesman, told the Washington Free Beacon.

“However, we don’t comment on our intelligence or assessments of foreign weapon systems,” Pool said in a statement. “We encourage greater transparency [by the People’s Republic of China] regarding their defense investments and objectives to avoid miscalculation,” he added.

The United States, Russia, and China are all engaged in a hypersonic arms race. All three nations are developing high-speed aerospace vehicles. India is also developing a hypersonic variant of its BrahMos cruise missile.

Hypersonic weapons use cutting edge technology for flying and maneuvering at ultra-high speeds in space and air. Future weapons will include powered and unpowered hypersonic vehicles fired from the last stages of ICBMs and submarine missiles, and from the bomb-bays of strategic bombers. Hypersonic cruise missiles and surveillance drones also are expected.

The military advantages of hypersonic craft include precise targeting, very rapid delivery of weapons, and greater survivability against missile and space defenses.

Space and cyber warfare is here folks. The Chinese are going to use this against us. They have weaponry that kills satellites and now hypersonic weaponry that will bring death faster than the speed of sound. And we are doing nothing to counter it. Nothing. Worse than nothing – we invite the Chinese into NASA and our intel agencies. We sell and give our secrets to them as well. It’s absolute suicide and the Chinese are patient. They will wait until the timing is just right, when we are at our weakest financially and militarily.

China is very, very busy developing weapons and weapons transport methods. They have come up with a hypersonic scramjet-powered vehicle that is able to take off by itself or be launched from a bomber. The vehicle is meant to combine the characteristics of space-transiting ballistic missiles with ground-hugging cruise missiles. The speed of these vehicle will challenge our missile defenses and that is a challenge the Chinese just might win.

The Chinese and Russians feel they can take on the US militarily and win. With a depleted force and gutted weaponry, frankly, I’m not sure I would bet against our enemies currently. We must turn this around and strengthen our forces for what is to come if we are to survive.

The Russians also have “a new class of hypersonic vehicle” that would “allow Russian strategic missiles to penetrate missile defense systems.” It is a whole new frontier in military advancement. As we changed the world with atomic weapons, so will hypersonic weaponry change the geopolitical alignment of the earth once again. Only this time, we are not the ones with the upper hand.

“Today, we are experiencing a revolution in military science,” Rogozin told Russian television June 23. “This revolution is connected with the rapid development of highly accurate means of destruction. These are cruise missiles and high-speed rocket weapons. In the future, there will be hypersonic weapons.”

Russia also is developing an air and space defense system called the S-500 with interceptors capable of shooting down hypersonic vehicles.

Ian Easton, in a report published by the Project 2049 Institute, said China’s hypersonic weapons are part of what he called “the Great Game in space.”

“If there is a great power war in this century, it will not begin with the sound of explosions on the ground and in the sky, but rather with the bursting of kinetic energy and the flashing of laser light in the silence of outer space,” Easton said.

Still think the Russians are our friends? The Chinese harmless? They are a clear and present danger to the US and to the free world. We are sitting on a load of C4 and the explosion will rock the world.

Rumors are swirling that China is getting ready to seize an island in the South China Sea. The Chinese claim it is ‘illegally’ occupied by our ally, the Philippines. Right now, it is bluster. But if China carries through on that threat, war will bloom and spread at the speed of, well, you know…

From the China Daily Mail[4] – a communist mouthpiece for China:

Relying on US support, the Philippines is so arrogant as to announce in the New Year that it will increase its navy and air force deployment at Zhongye Island, a Chinese island that it has illegally occupied for years.

It will be an intolerable insult to China.

According to experts, the Chinese navy has drawn a detailed combat plan to seize the island and the battle will be restricted within the South China Sea.

Following Japan’s proclamations that it will take over another 280 ‘disputed ownership’ islands[6], it appears the increasingly dis-approved of Prime Minister Shinzo Abe’s path of militarism and provocation is working. As China Daily Mail reports[7], citing experts, China intends to take back Zhongye Island – ‘illegally’ occupied by the Philippines, according to the Chinese. The Chinese navy has drawn a detailed combat plan to seize the island and the battle will be restricted within the South China Sea. Philippines military is building up on the island and the Chinese see as ‘intolerable’ the “arrogance” relying on US support. It seems the Obama administration may have to ‘not take sides’ in another fight soon[8]. 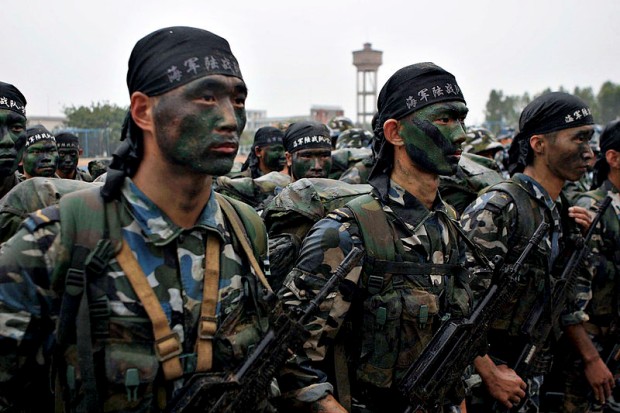 Infowars.com has this to say[9]:

The report arrives hot on the heels of Japan’s announcement[10] that it will “nationalize” around 280 islands in the disputed region, the latest shot across the bow in a tit-for-tat build up that experts have warned[11] heralds the beginning of a new cold war.

In October, China sent a surveillance ship[12] to Hawaiian waters for the very first time in an unprecedented move which was described as a provocative retaliation to the U.S. naval presence in the East China Sea.

A lengthy editorial which appeared in Chinese state media last month explained how the Chinese military’s current reformation process was part of a move by President Xi Jinping to prepare the People’s Liberation Army for war[13] in response to US aggression in the Asia Pacific, developments which have prompted “major changes” in China’s national security situation.

Strident rhetoric about Beijing’s ability to attack US military bases in the Western Pacific[14], as well as the release of a map[15] showing the locations of major U.S. cities and how they would be impacted by a nuclear strike launched from the PLA’s strategic submarine force also turned heads.

Following discussion in state media[16] about plans to to turn the moon into a Star Wars-style “death star” from which the PLA could launch missiles against any target on Earth, a display to promote China’s Jade Rabbit Moon rover also included a background photograph of a mushroom cloud over Europe[17].

Does that sound to you like nothing to worry about? China has the means and the will to carry out war. They want to rule the known world, just as Russia does, just as Iran does. For our enemies, peace is simply that period in time when you regroup, out-think, out-plan and out-arm your enemies. To sit passively and pretend that no one in the world has designs to rule or expand their empire is the height of arrogance and naivete. It invites war and death and right now the US has a gigantic welcome mat out for our enemies within and without. A new breed of WMDs has been born… will it be the death of the West and the free world? We better vote in conservative leadership in 2014 and strengthen our defenses – the Chinese and the Russians are coming.