Bowe Bergdahl is officially being charged with the things we all expected him to be charged with[1], which means everything that was said about the trade which brought him home is true. 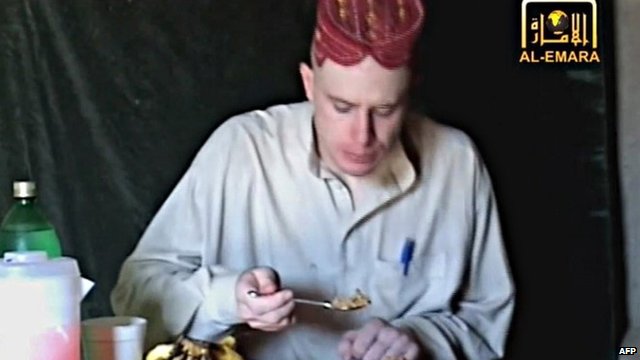 Military prosecutors have reached into a section of military law seldom used since World War II in the politically fraught case against Army Sgt. Bowe Bergdahl, the soldier held prisoner for years by the Taliban after leaving his post in Afghanistan.

Observers wondered for months if Bergdahl would be charged with desertion after the deal brokered by the U.S. to bring him home. He was — but he was also charged with misbehavior before the enemy, a much rarer offense that carries a stiffer potential penalty in this case.

“I’ve never seen it charged,” Walter Huffman, a retired major general who served as the Army’s top lawyer, said of the misbehavior charge. “It’s not something you find in common everyday practice in the military.”

Bergdahl could face a life sentence if convicted of the charge, which accuses him of endangering fellow soldiers when he “left without authority; and wrongfully caused search and recovery operations.”

Huffman and others say the misbehavior charge allows authorities to allege that Bergdahl not only left his unit with one less soldier, but that his deliberate action put soldiers who searched for him in harm’s way. The Pentagon has said there is no evidence anyone died searching for Bergdahl.

“You’re able to say that what he did had a particular impact or put particular people at risk. It is less generic than just quitting,” said Lawrence Morris, a retired Army colonel who served as the branch’s top prosecutor and top public defender.

(1) runs away;
(2) shamefully abandons, surrenders, or delivers up any command, unit, place, or military property which it is his duty to defend;
(3) through disobedience, neglect, or intentional misconduct endangers the safety of any such command, unit, place, or military property;
(4) casts away his arms or ammunition;
(5) is guilty of cowardly conduct;
(6) quits his place of duty to plunder or pillage;
(7) causes false alarms in any command, unit, or place under control of the armed forces;
(8) willfully fails to do his utmost to encounter, engage, capture, or destroy any enemy troops, combatants, vessels, aircraft, or any other thing, which it is his duty so to encounter, engage, capture, or destroy; or
(9) does not afford all practicable relief and assistance to any troops, combatants, vessels, or aircraft of the armed forces belonging to the United States or their allies when engaged in battle;

shall be punished by death or such other punishment as a court-martial may direct.

Obama gave up five of the most senior Taliban commanders in captivity to get Bergdahl back, so he can be charged under a statute which establishes a capital crime, much less life imprisonment.

The absurdity is astonishing.