A little pill called Captagon[1] turns Jihadists into superhuman soldiers. They don’t feel pain, they don’t fear death and they don’t get tired. They become killing machines. Bonus… it makes them murderously psychotic and causes brain damage after prolonged use. It’s cheap, easy to produce and highly addictive. The Syrians take it as do the rebels. And from what I hear, ISIS loves the stuff. They laugh when they are beaten, they are high when they rape, they are jazzed when they behead infidels. During the raid in Paris, French police said they found needles used by the attackers to inject themselves with Captagon. The drug may have helped them remain calm as they carried out their brutal attacks, which included slicing the bellies open of their victims while they were still alive. 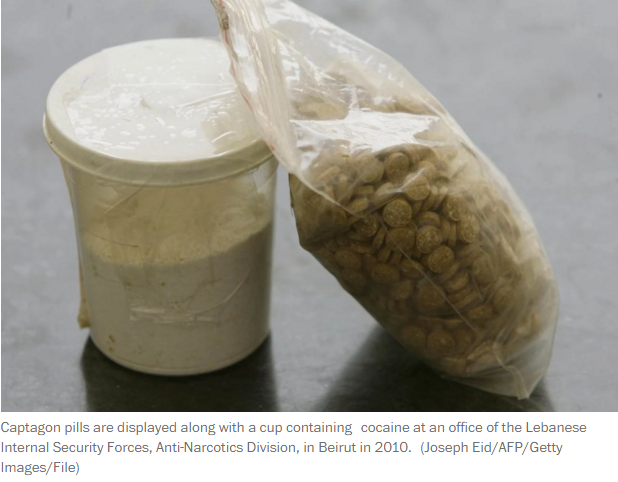 On the surface, those competing actors are fueled by an overlapping mixture of ideologies and political agendas.

Just below it, experts suspect, they’re powered by something else: Captagon.

A tiny, highly addictive pill produced in Syria and widely available across the Middle East, its illegal sale funnels hundreds of millions of dollars back into the war-torn country’s black-market economy each year, likely giving militias access to new arms, fighters and the ability to keep the conflict boiling, according to the Guardian[4].

A powerful amphetamine tablet based on the original synthetic drug known as “fenethylline,” Captagon quickly produces a euphoric intensity in users, allowing Syria’s fighters to stay up for days, killing with a numb, reckless abandon.

“You can’t sleep or even close your eyes, forget about it,” said a Lebanese user, one of three who appeared on camera without their names for a BBC Arabic documentary that aired in September[5]. “And whatever you take to stop it, nothing can stop it.”

“I felt like I own the world high,” another user said. “Like I have power nobody has. A really nice feeling.”

“There was no fear anymore after I took Captagon,” a third man added.

According to a Reuters report published in 2014[6], the war has turned Syria into a “major” amphetamines producer — and consumer.

“Syrian government forces and rebel groups each say the other uses Captagon to endure protracted engagements without sleep, while clinicians say ordinary Syrians are increasingly experimenting with the pills, which sell for between $5 and $20,” Reuters reported.

Captagon has been around in the West since the 1960s, when it was given to people suffering from hyperactivity, narcolepsy and depression, according to the Reuters report[7]. By the 1980s, according to Reuters, the drug’s addictive power led most countries to ban its use.

VOA notes that while Westerners have speculated that the drug is being used by Islamic State fighters, the biggest consumer has for years been Saudi Arabia. In 2010, a third of the world’s supply — about seven tons — ended up in Saudi Arabia, according to Reuters. VOA estimated that as many as 40,000 to 50,000 Saudis go through drug treatment each year.

Five years later, production of Captagon has taken root in Syria — long a heavily trafficked thoroughfare for drugs journeying from Europe to the Gulf States — and it has begun to blossom.

“The breakdown of state infrastructure, weakening of borders and proliferation of armed groups during the … battle for control of Syria, has transformed the country from a stopover into a major production site,” Reuters reported.

“Production in Lebanon’s Bekaa valley – a traditional centre for the drug – fell 90% last year from 2011, with the decline largely attributed to production inside Syria,” the Guardian noted.

Cheap and easy to produce using legal materials, the drug can be purchased for less than $20 a tablet and is popular among those Syrian fighters who don’t follow strict interpretations of Islamic law, according to the Guardian.

Doctors report that the drug has dangerous side effects, including psychosis and brain damage, according to the BBC.

According to the news service:

A drug control officer in the central city of Homs told Reuters he had observed the effects of Captagon on protesters and fighters held for questioning.

“We would beat them, and they wouldn’t feel the pain. Many of them would laugh while we were dealing them heavy blows,” he said. “We would leave the prisoners for about 48 hours without questioning them while the effects of Captagon wore off, and then interrogation would become easier.”

One secular ex-Syrian fighter who spoke to the BBC said the drug is tailor-made for the battlefield because of its ability to give soldiers superhuman energy and courage:

“So the brigade leader came and told us, ‘this pill gives you energy, try it,’ ” he said. “So we took it the first time. We felt physically fit. And if there were 10 people in front of you, you could catch them and kill them. You’re awake all the time. You don’t have any problems, you don’t even think about sleeping, you don’t think to leave the checkpoint. It gives you great courage and power. If the leader told you to go break into a military barracks, I will break in with a brave heart and without any feeling of fear at all — you’re not even tired.”

Another ex-fighter told the BBC that his 350-person brigade took the pill without knowing if it was a drug or medicine for energy.

There are several things[8] you should know about the drug. Syria’s speed freaks feel invincible, like they can’t be taken out. They feel no pain and no exhaustion. The profitable trade in the highly coveted drug is funding their weaponry and battle plans. It costs pennies to make and each pill sells for up to $20. It is called ‘the drug of the Jihadists.’ It produces a killer euphoric high. Fighters lose all sense of morality and any conscience they might have had. They are calm and brutal while on the drug. Captagon stimulates Dopamine production and improves concentration. Along with brain damage, it also causes heart damage. While on the drug, people become paranoid and hyper-vigilant. They lose judgement capabilities. It makes a person the perfect soldier who takes orders, has uber situational awareness and just loves to kill. This is what ISIS is taking to become what they are – monsters. Monsters that should be killed without a second thought.