Marine General Makes Terrifying Announcement About The State Of Our Military – Are We Prepared For War?

Gen. Paxton is not the only one[1] by a long shot ringing the alarm bells here. Many of the leaders in our military are now saying this. Obama has depleted our weapons cache and our military in general so much that there is a serious question as to whether we could fight a war, much less win it now. If the Marines were called today to respond to an unexpected crisis, they might not be ready, a top Marine general told the Senate Armed Services Committee on Tuesday. “In the event of a crisis, these degraded units could either be called upon to deploy immediately at increased risk to the force and the mission, or require additional time to prepare thus incurring increased risk to mission by surrendering the initiative to our adversaries,” Paxton said. We have Russia, China, Iran and North Korea probing our defenses and gearing up for war with us. Thanks to Obama, we are sitting ducks. 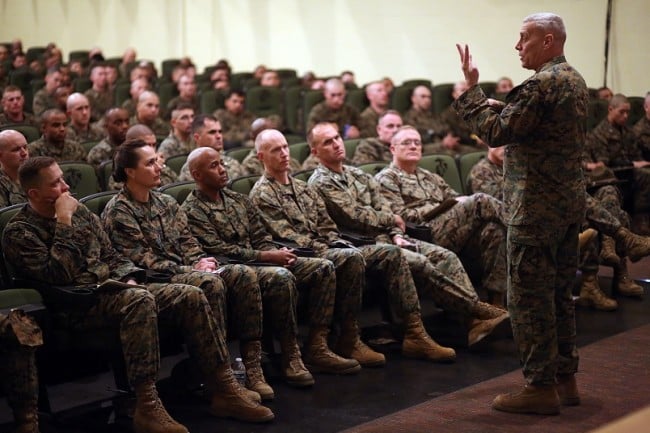 In testimony before the Senate Armed Services Committee on Tuesday, a top Marine general made a disturbing statement about how the United States might respond to an unexpected crisis or even a war — and it should have everyone worried.

Gen. John Paxton, assistant commandant of the U.S. Marine Corps, testified that if the Marines were called upon to respond to a crisis, they might not be up for the challenge of deterring a potential enemy and could even face additional casualties because of that lack of readiness.

“I worry about the capability and the capacity to win in a major fight somewhere else right now,” the general said, noting a lack of training and equipment[3], according to Stars and Stripes[4].

The Marines are having to share weapons currently as are other branches of our service. Many are having to buy their own medical supplies, helmets and ammo. Communication, intelligence and aviation units are the hardest hit, Paxton said. “All of our intelligence and communications battalions… would be unable to execute their full wartime mission requirements if called upon today,” he said. Obama is not the only one to blame here. Congress could rectify this if they had the will. This is shameful and suicidal. The aviation units are faring no better, Paxton said. Approximately 80 percent of Marine aviation units lack the amount of ready aircraft that they need for training and to respond to an emergency, he said. I contend this is all by design. Obama wants us on our knees militarily before the world. He doesn’t care if we are attacked. And forget fighting terrorism from within. It’s all a political prop to him. If you aren’t terrified over the state of our military, you haven’t been paying attention and you should be.