Looks like Sec Def Mattis[1] is stocking up for a party with ISIS. He has all kinds of party favors on his list for President Trump’s budget: Hellfire missiles, Joint Direct Attack Munitions (JDAMs), Guided Multiple Launch Rocket Systems (GMLRS), Small Diameter Bombs (SDBs), Tomahawk missiles and Advanced Precision Kill Weapon Systems (APKWS). Looks like the guest of honor is going to get blasted. Good times. Under Obama, from 2014 to 2017 the Pentagon spent $2.8 billion on combat munitions. Now, they are spending a whopping $16.4 billion.

Hey Jihadists… remember when we said we were coming for you? Here’s our calling card. I consider this very good news and very uplifting. Mattis isn’t messing around. Since the enemy loves death so much, he’s going to oblige them. Mattis himself requested $3.5 billion more in “preferred munitions” in Trump’s budget. That’s the kind of leader we need here. 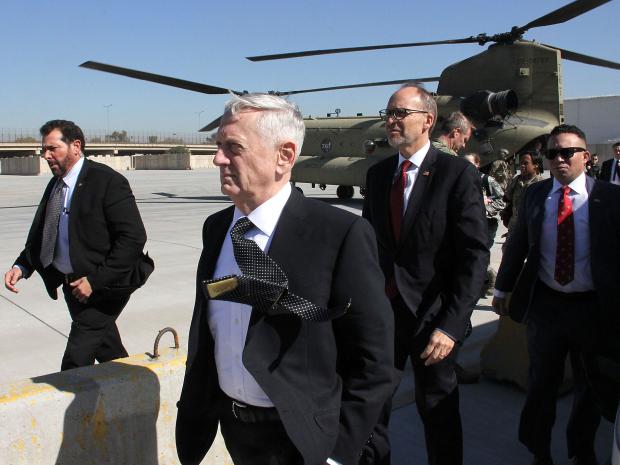 Mattis intervened in the Fiscal Year 2018 budget and put in a request for $3.5 billion in “preferred munitions” to replenish weapons stockpiles for the fight against ISIS. The petition pushes procurement for six different weapons to the maximum, acting undersecretary of defense and chief financial officer John Roth explained[3], according to Defense News.

“As we closed out this budget, over the last two or three weeks in particular, a great deal of concern was being raised with current inventory levels, particularly given some of the expenditures in the [U.S. Central Command] area of operations,” Roth told reporters when the Pentagon rolled out its budget, “So, the secretary mandated and insisted we fully fund, to the maximum extent possible, the full production capacities for certain selected preferred munitions.”

Under Obama, our weaponry was seriously depleted. That now has to be fixed and it is money well spent. Mattis said Friday that the Trump administration’s strategy is to “annihilate ISIS.” The aim is to “carry out the annihilation campaign so we don’t simply transplant this problem from one location to another,” he explained. I love that sentiment… kill the bastards.

Speaking alongside Chairman of the Joint Chiefs of Staff Gen. Joseph Dunford and Special Presidential Envoy for the Global Coalition to Counter ISIS Brett McGurk, Mattis noted that commanders have been given greater authority to move quickly in the fight without first seeking approval from Washington. “We have changed, tactically, how we’re going to carry it out. We have accelerated the campaign and that’s shown up clearly in our tactical reports that are coming in,” Mattis said. In other words, Trump isn’t micromanaging this. He’s given our military leaders the green light to fight and kill the enemy. Mattis is gathering more weapons and more troops – ISIS is going to get pounded into the freaking ground.