Meet the Young Jihadists of ISIS: How Afghan Children are Converted into Terrorists

Frontline takes an incredible look[1] at how Islamic State militants have spread across Afghanistan, at the center of the war on terrorism. ISIS is co-opting the Taliban and taking more and more control. Most disturbing of all is their indoctrination of Afghanistan’s children. They show them propaganda videos every day to learn how to be terrorists. This is part of ISIS’ military training for them. They have military schools where these children go and learn how to kill infidels, behead people and carry out suicide attacks. The children copy what they have just watched and practice killing with cold diligence. 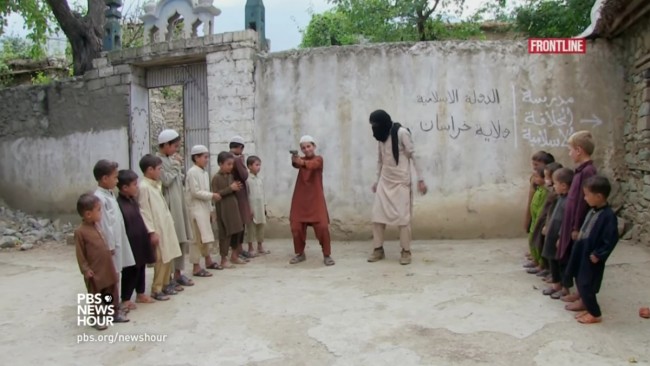 As the Islamic State has swept across the Middle East, militants have gradually built up strength in Afghanistan, where they’ve fought and co-opted members of the Taliban while battling Afghan national army forces. Afghan journalist Najibullah Quraishi spent almost a year negotiating before gaining access to the ISIS stronghold in Afghanastan, where he gained an unprecedented look at how the terrorist group converts children to their cause.

Watch the PBS Newshour report[3] below:

This is Jihad being taught to these children. It is sheer hate and evil. They are stealing their childhood and turning them into monsters. Kids are being groomed to die for the Islamic State and wipe unbelievers off the face of the earth. Frontline’s expose on this is very well done. It shows the sheer evil of the men turning these children into killers. It is the only education they are getting. They start them at three and five years-old. They are to prepare for war at the ages of twelve or thirteen. This is a very, very powerful piece of reporting. You really get to see ISIS in action in a way that many of us in the West have never seen before. Teenagers are actively preparing to blow themselves up. They are threatening the world with conquest and the Caliphate. This report shows how children will be used as soldiers of Allah and in death squads. It is terrifying.[4]