The persecution of Christians under President: Barack Obama‘s tutelage is rampant, some critics say. A claim that’s hard to argue against when a: Veterans Affairs: chaplain training program makes it clear that: Jesus: and: the Bible: are no longer welcome. 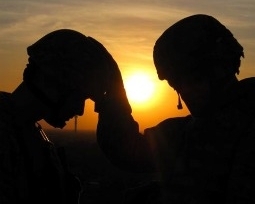 [1]Two Baptist chaplains said they were forced out of a program after refusing orders to stop quoting the Bible and to stop praying in the name of Jesus, Fox News Radio’s Todd Starnes reported Monday.

Lt. Commander Dan Klender, a Navy chaplain, and Maj. Steven Firtko, a retired Army chaplain, enrolled in the VA’s Clinical Pastoral Education Center program in San Diego last year, according to Starnes. The one-year training program is required to work as a chaplain in a VA hospital.

“Not only was the treatment these men received inappropriate, it was also a violation of federal law and the religious freedom guarantees of the First Amendment,” attorney John Wells told Fox News.

“No American choosing to serve in the armed forces should be openly ridiculed for his Christian faith,” Wells added, calling it one of the most blatant cases of religious discrimination he has ever seen.

The training program is led by Nancy Dietsch, a Veterans Affairs employee.

“She’s been very, very critical of Christians,” Wells told Starnes in a telephone interview. “Instead of teaching anything dealing with faith issues, she’s dealing with a holistic, humanistic approach. It’s the idea that the spirit comes from within.”

As noted in the report, the VA released a statement saying Klender and Firtko were “bullying other classmates and refusing to honor other faith groups.”