Well, gee, if the Military can fight with guns on foreign soil, it makes sense for them to use those domestically, too. DUH. Maybe the Military needs to exercise a little more common sense and A LOT less politically correct butt kissing:
Let the military defend themselves and this might not[1] be necessary. 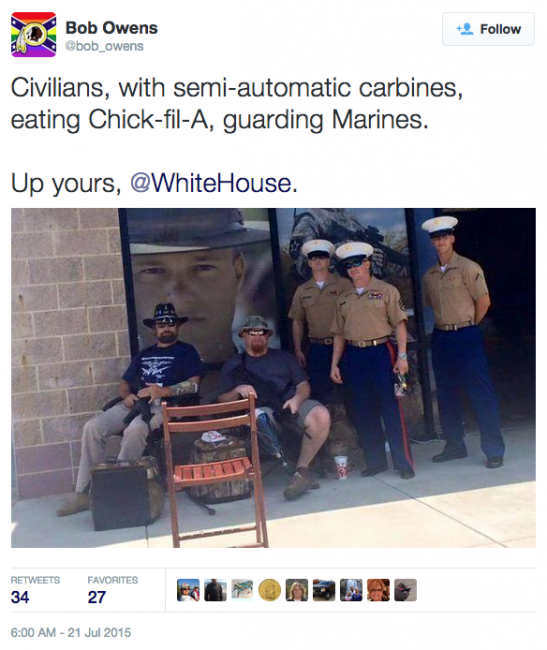 The Army has told its recruiters that the armed citizens showing up outside recruiting offices in the wake of the recent attack in Chattanooga, Tennessee, should be considered threats and reported to local police.

“I’m sure the citizens mean well, but we cannot assume this in every case and we do not want to advocate this behavior,” according to the Army Command Operations Center-Security Division letter obtained by Stars and Stripes. “If questioned by these alleged concerned citizens, be polite, professional and terminate the conversation immediately and report the incident to local law enforcement.”

“Ensure your recruiters clearly articulate to local police the civilian may be armed and in possession of a conceal/carry permit.”

A number of the armed citizens standing guard outside recruiting centers told reporters they were there to protect the recruiters since the military requires they be disarmed at work. “They’re sitting ducks,” the founder and president of Oath Keepers, which has asked its members to guard recruiting centers, Stewart Rhodes told the Associated Press on Tuesday. “They’d be better off if they were walking down the streets of Baghdad, because at least in Baghdad, they could move. Here, they’re stationary.”

“We’re here to serve and protect,” Clint Janney told the AP. “What the government won’t do, we will do.”

Sad, really. Civilians should be able to carry weapons in public if needed. Clearly this is needed, since even though there have been attacks at recruitment centers, the Military is not going to allow the recruiters to be armed. It’s like we hung a big sign out, all in neon, the says “ATTACK US RIGHT HERE. WE CAN’T EVEN FIGHT BACK”. It’s ridiculous. I’ve said it before and I’ll say it again – these are trained service personnel that know how to use weapons. The only danger here is that a terrorist might get a face full of lead, and I can’t say that would be a huge regret, would you?