Some celebrities will do nice things for veterans, like help arrange a homecoming surprise or set up a meeting. But not many will spend three months hunting down a military family in order to give the service member a chance to meet his idol — but what’s what Denver Broncos quarterback Peyton Manning did after receiving a letter from military wife Kristen Patteron. 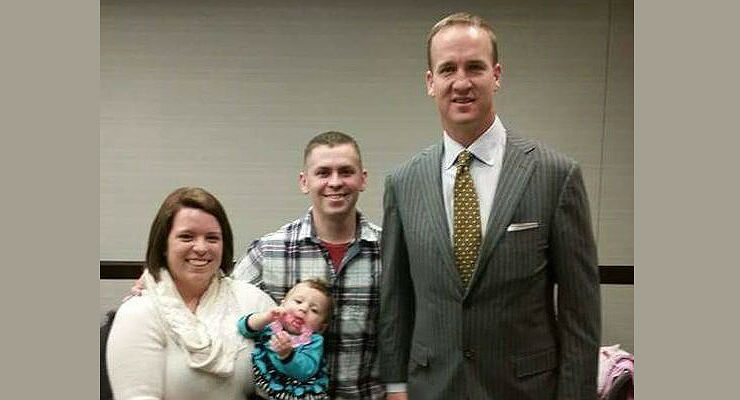 Legendary quarterback Peyton Manning no doubt receives stacks of fan mail every day. Recently, however, one letter from an Alaska woman got his attention, and led to a call from the police — and an incredible opportunity.

Kristen Patterson grew up in Indiana, a state where Manning used to play football with the Indianapolis Colts. Both the woman and her husband, Army Sgt. Ryan Patterson, are major fans of the NFL star.

When Kristen asked Manning to simply say “hello” to her veteran husband, she had no idea that he would even open the letter. What actually happened shocked her: She received a call from the Alaska State Troopers, who were trying to locate her on behalf of Peyton Manning.

“When I got a call from (an Alaska) State Trooper they asked if I wrote a letter to Peyton Manning,” Patterson said, according to 9News. It turns out that Manning wanted to meet with her and her husband, but couldn’t locate them.

That letter had apparently made a big impression on the star, who now plays for the Denver Broncos.

… When the police called Kristen, she was understandably confused about the call. However, the police explained that Manning had arranged the call in order to keep it a secret from Sgt. Patterson.

In her enthusiasm about writing the letter to the quarterback, Kristen Patterson had neglected to include her phone number or other contact information. Amazingly, Peyton Manning gave his personal assistants the task of tracking her down… all the way to Alaska.

According to Mad World News, both Kristen Patterson and Peyton Manning were able to keep the meeting secret until the day before the Bengals vs. Broncos football game.

The veteran of Afghanistan was clearly excited to meet the star player, but assumed that it would be an impersonal group interaction in the hotel lobby. Then Peyton Manning surprised the Patterson’s again: They were escorted to a private conference room for a one-on-one meeting with the famous quarterback.

When Manning arrived, he personally thanked Sgt. Patterson for his military service. “He seemed genuinely tickled that we lived in North Pole, Alaska. He said, ‘You guys are really hard to find,’” Ryan Patterson recalled.

“(Kristen) enjoyed the fact that she is the greatest wife ever and there was nothing I could ever do to top this,” the solider explained. “If you asked me who is the one person, anybody in the world, I want to meet, I would immediately say Peyton Manning and she made that happen.”

It’s always nice to see celebrities going out of their way to do something good, especially when it’s for people like the Pattersons who sacrifice for this country. Manning could have given up and done something else for another fan, that didn’t require so much work and effort, but instead he stuck it through and gave this soldier a great moment — he deserves every bit of positive publicity he gets for that.