Once a Marine, always a Marine. I love this guy! Retired Marine Major R.E.G. “Fox” Sinke is telling the radical Jihadists to bring it and baby, I think that if they did, there would be some rather dead terrorists littering the monument in Canada. So, they think they can call a retired Marine and scream Arabic epithets over the phone and he will back down? Dream on. Courage made in America and he’s ready to dance[1]. 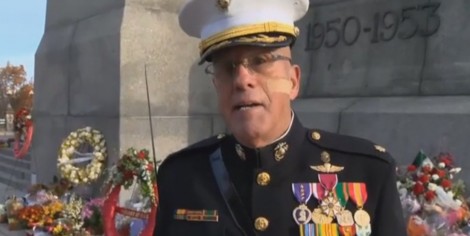 Last month, the world was shocked by the brutal terrorist attack on Canada’s War Memorial. The Honorary Guard standing by the memorial was shot by a radical Muslim, leaving the monument unguarded at certain times of day.

Since then, retired Marine Major R.E.G. “Fox” Sinke, a highly-decorated Vietnam War veteran, has stepped up and chosen to spend his time guarding the sacred memorial. Since the shooting, Sinke has arrived at the monument early in the morning and stood guard outside it until the honorary guard arrives for his shift.

The veteran admits that he has received numerous death threats, many of them from Muslims who scream at him in Arabic over the phone. Despite the danger, Sinke isn’t planning on giving up his post anytime soon.

“If they’re looking for a fight, they came to the right guy,” he said. “I promise you this: if they come here, they’ll die here.”

Sinke also has a message for any terrorists who are hoping to kill him at his post.

“Hey, you’re looking for a target, here’s a new one for you; give it your best shot; we’ll see how it works out for you.”

Now THIS is the type of patriotic veteran that we love to see!

Contrary to what the communists and terrorists think, the majority of Americans have a spine and will fight to the bloody death to defend their country and their principles. If you have judged us by our politicians, you have made a very serious error in your calculations. Most of America is armed, ready and willing to do the Fox Trot with these monsters. This Marine is a true patriot and we are extremely proud of him. We fight not only for ourselves, but for our friends the Canadians when needed. If you are looking for a fight, you came to the right place. Oorah!