Liberals just can’t stand that a movie might take a positive view of our men and women in the military, so they’ve been going on the attack against Chris Kyle and the movie ‘American Sniper’. Noam Chomsky took it to the next level, though, attacking not only Chris Kyle, but the military at large. 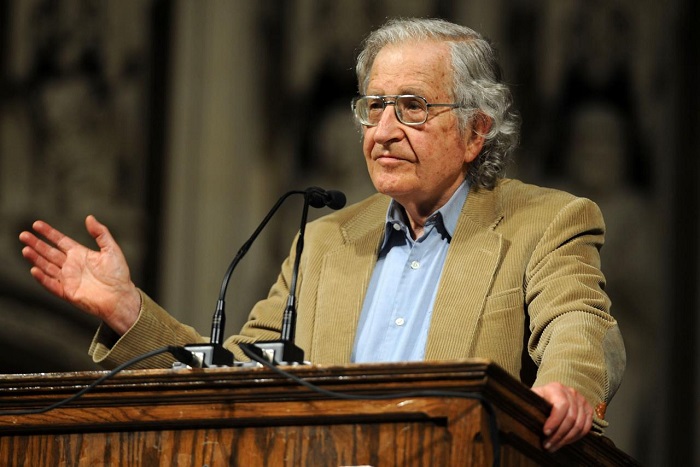 During a Cambridge, Massachusetts event hosted by The Baffler, Chomsky first read the glowing recent review the New York Times gave the movie. That review begins inauspiciously by insulting, “America’s coastal intelligentsia, which has busied itself with chatter over little-seen art dramas while everyday Americans showed up en masse for a patriotic, pro-family picture which broke all attendance records in its opening days.”

So, Chomsky wonders aloud: “What was the patriotic, pro-family film that so entranced everyday Americans? It’s about the most deadly sniper in American history, a guy named Chris Kyle, who claims to have used his skills to have killed several hundred people in Iraq.”

… “Getting back to Chris Kyle,” Chomsky said, arriving at his larger point. “He regarded his first kill as a terrorist — this woman who walked in the street — but we can’t really attribute that to the mentality of a psychopathic killer, because we’re all tarred by the same brush insofar as we tolerate or keep silent about official policy.”

“Now, that [sniper] mentality helps explain why it’s so easy to ignore what is most clearly the most extreme terrorist campaign of modern history, if not ever — Obama’s global assassination campaign, the drone campaign, which officially is aimed at murdering people who are suspected of maybe someday planning to harm us.”

Yes, Chris Kyle killed hundreds of people in Iraq — and by doing so, he saved countless more lives, both of innocent Iraqi civilians and American service members. And while it’s super easy to stick your head in the sand and pretend that Islamic terrorists aren’t actively trying to kill us, that doesn’t make it true.