Determined to end the military’s “Don’t Ask, Don’t Tell” policy and allow gays to serve openly,President Obama: told the heads of the five service branches in a meeting in 2010 to either support his effort or resign. 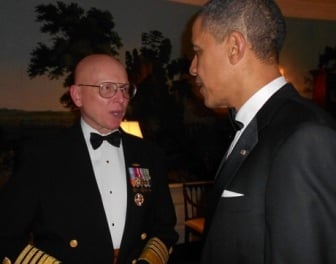 In a video obtained by BuzzFeed[2], Coast Guard Commandant Adm.Robert Papp, who was at that meeting, can be seen speaking of the ultimatum put forth by Obama.

“We were called into the Oval Office and President Obama looked all five service chiefs in the eye and said, ‘This is what I want to do.’ I cannot divulge everything he said to us, that’s private communications within the Oval Office, but if we didn’t agree with it – if any of us didn’t agree with it – we all had the opportunity to resign our commissions and go do other things,” Papp said.

The uncompromising position taken by Obama contradicts remarks he made as a U.S. senator from Illinois that he wouldn’t make the issue “a litmus test” for his military leaders, according to The Buzz.

“What I want are members of the Joint Chiefs of Staff who are making decisions based on what strengthens our military and what is going to make us safer, not ideology,” Obama said at the time.

But then, Obama has a tendency to say things that later turn out to be not so true.