Obama Just Made a Terrifying Announcement – This Isn’t Good…

Because when he gets up and insists there is no threat[1], you just know there is one. Which we already knew since Obama insists on keeping the borders open and bringing in thousands and thousands of Muslim refugees that no doubt have ISIS militants in their midst. Obama calls ISIS killers with really good social media skills. They aren’t bad with bombs, guns, knives or a whole host of other killing methods either. Our president is bringing them directly to America where attacks such as the one in Paris can become commonplace. Then he’ll pretend that he doesn’t understand why, when all along it was his goal. Our Intelligence agencies, DHS and the military may have stopped some threats, but they won’t stop all of them. That’s impossible when you have this many terrorists running around free. Obama is talking out of one side of his mouth and doing something entirely the opposite. Just like he always has. 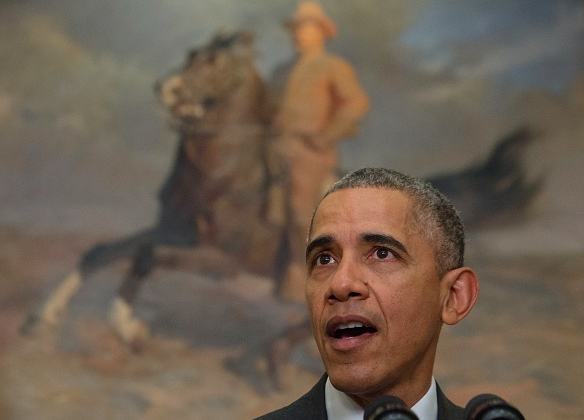 After a Wednesday meeting with the National Security Council, President Barack Obama sought to reassure Americans on the eve of Thanksgiving that the military, intelligence community and homeland security officials are working overtime to keep the country safe.

“It is understandable that people worry if something similar could happen here, and the events in Paris made the threats feel closer to home as we are going into Thanksgiving weekend,” Obama said. “I want the American people to know that we are taking every possible step to keep our homeland safe.”

“Right now, we know of no specific and credible intelligence indicating a plot on the homeland,” Obama said. “That is based on the latest information that I just received in the Situation Room.”

He later added, “In the event of a specific, credible threat, the public will be informed.”

He also called for Americans to be vigilant, saying, “If you see something suspicious, say something.”

Obama said the U.S. military is going after the Islamic State, doing “everything possible to prevent the attacks at home and abroad”

“As Americans are traveling this weekend to be with their loved ones, I want them to know that the counterterrorism and security and law enforcement professionals at every level are working overtime, and they are continually monitoring threats at home and abroad, continually evaluating our security posture,” Obama said. “They are constantly working to protect all of us. Their work has prevented attacks. Their efforts have saved lives.”

“I want the American people to know that entering the holidays that the combined resources of our military, our intelligence and our homeland security agencies are on the case,” Obama said.

Our military isn’t going after ISIS. Don’t make me laugh. Obama is stopping 75% of the ordinance drops we want to do against them. He’s dropping fliers and warning the enemy 45 minutes before we bomb their trucks. He’s bombing deserted facilities. This is faux war… one that Obama has no intention of winning. We have a year left of this nightmare and it is going to get very, very bad. I don’t know how Obama knows about any threat against the homeland – he doesn’t even look at the Intel, much less give a rip about it. There is always a credible threat out there folks. They just don’t disclose it to the public. We should enjoy this Thanksgiving, but we should also up our situational awareness, be armed and ready. We should be paying attention to what is going on around us and our loved ones. Obama is not going to protect us when the attacks come and they will come sooner or later thanks to this insanity. And they won’t inform us or they’ll tell us half truths. Obama wouldn’t come out and do an address telling America she has nothing to fear, unless she did indeed have something to fear.