Under Barack Obama, the military is becoming ever more hostile to Christianity. In fact, per Breitbart[1], our military is basically saying that Christians have to give up their First Amendment right to the “free exercise” of religion to avoid prosecution. 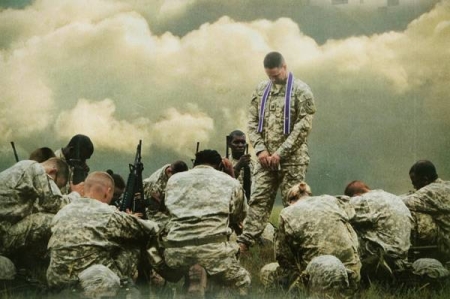 The Pentagon has released a statement confirming that soldiers could be prosecuted for promoting their faith: “Religious proselytization is not permitted within the Department of Defense…Court martials and non-judicial punishments are decided on a case-by-case basis…”.

The statement, released to Fox News, follows a Breitbart News report on Obama administration Pentagon appointees meeting with anti-Christian extremist Mikey Weinstein to develop court-martial procedures to punish Christians in the military who express or share their faith.

(From our earlier report: Weinstein is the head of the Military Religious Freedom Foundation, and says Christians–including chaplains–sharing the gospel of Jesus Christ in the military are guilty of “treason,” and of committing an act of “spiritual rape” as serious a crime as “sexual assault.” He also asserted that Christians sharing their faith in the military are “enemies of the Constitution.”)

Being convicted in a court martial means that a soldier has committed a crime under federal military law. Punishment for a court martial can include imprisonment and being dishonorably discharged from the military.

So President Barack Obama’s civilian appointees who lead the Pentagon are confirming that the military will make it a crime–possibly resulting in imprisonment–for those in uniform to share their faith. This would include chaplains–military officers who are ordained clergymen of their faith (mostly Christian pastors or priests, or Jewish rabbis)–whose duty since the founding of the U.S. military under George Washington is to teach their faith and minister to the spiritual needs of troops who come to them for counsel, instruction, or comfort.

This regulation would severely limit expressions of faith in the military, even on a one-to-one basis between close friends.

In other words, a soldier saying, “Want to go to church with me to learn about our Lord and Savior Jesus Christ?” could face court martial. That’s immoral, un-American and blatantly unconstitutional. Military careers should end over this.

Of course, that won’t happen since Barack Obama is in the White House, but here’s a word of warning for any generals going along with this: Persecuting Christians in the military can and should be a career-ender for any general who goes along with it and there’s a better than even chance Republicans will be back in the White House in 2016. Social conservatives have LONG MEMORIES. Don’t say you weren’t warned.