PHOTO: What These Parents Let Their Kids Do at a Vietnam Memorial Sparks Heated Debate About ‘Respect’

Would you let your kids climb and play on a war memorial? Apparently some parents out there would, in full view of veterans no less, and a photo of the kids treating the Vietnam Women’s Memorial as a jungle gym has the nation outraged. 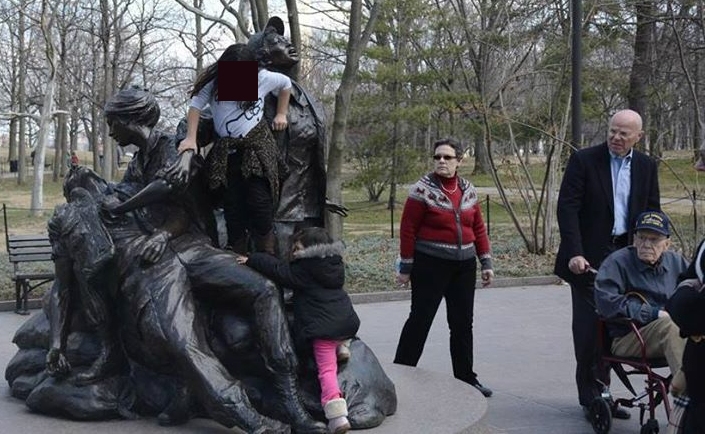 The photo was taken by Matthew Munson, who noticed the children’s parents encouraging them to climb on the memorial for a photo op. Munson noticed a group of veterans walking up, just after the children had started playing on the memorial.

“There wasn’t a lot of people at this point. Then a big group of people showed up just as the kids were treating the memorial more like a jungle gym and the parents were laughing.

Then the veterans showed up, and they looked hurt more than angry. They were quiet.”

“That’s when I noticed a big group around the parents glaring at them, the pressure was intense, and the kids [were] blissfully ignorant. That’s when I snapped the picture.

I tried getting a good shot of the crowd and the parents too, but no luck. Kids jumped down and skittered off with their parents.”

The problem here isn’t with what the kids were doing — they’re just children, and there’s no way for them to know better if their parents don’t teach them. And therein lies the problem: rather than teaching their children to have respect and reverence for memorials to the brave people who gave their lives for our country, they instilled apathy and disrespect, and that is unacceptable. The parents are the problem here, not the kids.