Secretary of Defense James (Mad Dog) Mattis[1] appeared on CBS’ Face the Nation this weekend and gave what is possibly one of the greatest quotes of all time. He was on the show to discuss threats to the US, along with the Paris Climate Accord and NATO. Dickerson asked Mattis what keeps him up at night… “Nothing,” Mattis bluntly stated. “I keep other people awake at night.” And that is true. I’m sure he keeps a LOT of terrorists awake at night, just before he sends them straight to hell where they belong.

That is all American right there. Mattis has promised to annihilate ISIS and pound them into the freaking ground. He’s already requested $3.5 billion in special weaponry, the better to kill them with. I’m sure that Dickerson was surprised by Mattis’ answer, but he shouldn’t be. This is a legendary military man who fears very little, but strikes massive fear into the hearts of our enemies. In other words, he’s very, very good at what he does. 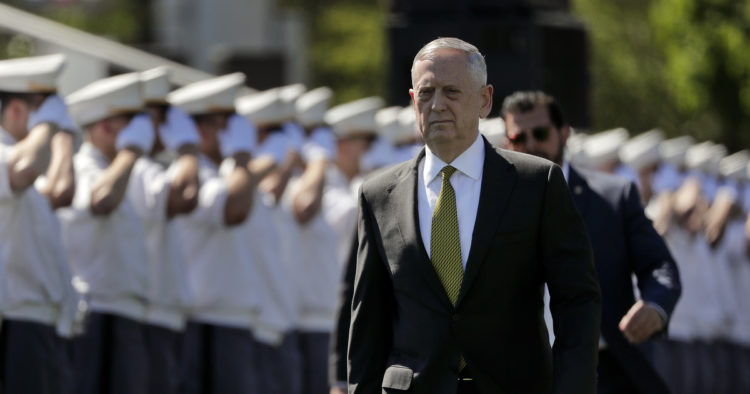 Secretary of Defense James Mattis appeared on CBS’s Face the Nation this morning for an extensive interview that touched on a wide range of topics such as the Paris climate accords, NATO and the possibility of a conflict with North Korea.

At one point in the interview, host John Dickerson wanted to know one thing — what keeps the retired general awake at night.

“Nothing,” Mattis bluntly stated. “I keep other people awake at night.”

Pretty sure that moment is going to get replayed quite a bit over the coming days and weeks. At the very least, it drew a lot of attention on Twitter today:

Also on @FaceTheNation[3]:
JOHN DICKERSON: What keeps you awake at night?
SECRETARY JAMES MATTIS: Nothing. I keep other people awake at night.

Mad [email protected][7]: "What keeps you up at night?"
Sec of Defense James Mattis: "Nothing, I keep other people awake at night"

Dickerson to Mattis: What keeps you awake at night?

Mattis has a long list of famous quotes and this will go right at the top of them. “When you men get home and face an anti-war protester, look at him in the eyes and shake his hand. Then, wink at his girlfriend because she knows she’s dating a pussy,” Mattis once said. That’s the kind of man’s man that Mattis is. He doesn’t mince words and he doesn’t screw around.

More: “I come in peace. I didn’t bring artillery. But I’m pleading with you, with tears in my eyes. If you fuck with me, I’ll kill you all,” Mattis told Iraqi leaders during the 2003 invasion. “Be polite, be professional, but have a plan to kill everybody you meet,” Mattis was known to tell Marines under his command during the Iraq war. That’s my kind of leader. No wonder soldiers respect the heck out of this guy.

In his interview[12] with Dickerson, Mattis discussed the US military’s shift in strategy in the fight against ISIS. “Annihilation” rather than “attrition” is the goal now, he said. Exactly. Faster, faster pussycat.