Secretary Of Defense, James Mattis Asked How We Will DEFEAT ISIS – This Is His Response… [VIDEO]

Defense Secretary James Mattis[1] is an expert military strategist. Tuesday, he had his first official press conference since taking charge at the Pentagon and he was asked how he would handle ISIS. At issue was getting drawn deeper into the Syrian civil war after striking an airbase there with 59 Tomahawk missiles in response to Assad using Sarin gas on his own people. Mattis definitively said that we were not looking to topple Assad in a regime change.

Something should be made abundantly clear to Americans here… Mattis isn’t going to tell us what is or isn’t going down militarily on his watch. He won’t even hint at it, so don’t expect revelations from the Pentagon. It’s not how it is done there.

In regards to the chemical attack, Mattis had this to say: “We know we could not stand passive on this.” But he also knew we could not go on an unrestricted bombing campaign without wading into the conflict. “We had to make a very, very clear statement” to the Assad regime and its allies in Russia and Iran that use of chemical weapons would not be tolerated by the U.S. or its international allies, the Pentagon chief said. And I think they accomplished that. Mattis considered it a ‘measured’ response. There is a near-century-old[2] international prohibition against the use of chemical weapons and the Syrian regime’s repeated violations of that international law and the inexplicably ruthless murders the regime had committed forced America to take action. 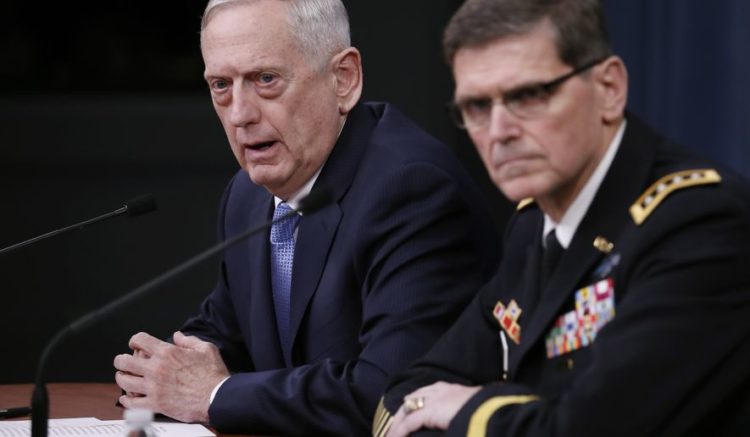 The precision U.S. strike against a Syrian airbase last week was a compromise effort by President Trump’s national security team to punish President Bashar Assad[5]’s use of chemical weapons, while making sure Washington does not get sucked deeper into the country’s six-year civil war, Defense Secretary James Mattis[6] said Tuesday.

In his first official press conference since taking the helm at the Pentagon[7], Mr. Mattis[8] told reporters at the Pentagon[7] that the decision to strike the al Shayrat airbase in western Syria “was in no way a harbinger of a change in our campaign” against Islamic State in the country.

His comments fall in line with the rhetoric coming from the White House[9] that the Syrian strike was not the opening salvo in a new front in the Syrian war.

The U.S. strike, in which two American destroyers fired 59 Tomahawk cruise missiles on the airbase, was strictly a retaliatory strike against the Assad regime’s chemical attack against anti-government forces in northern Syria’s Idlib province. Critics inside and outside of Washington said the strike, the first ever against Mr. Assad[10]’s forces, would draw the U.S. deeper into the country’s civil conflict.

As for ISIS, there is a skeleton plan in place. It will take long, hard work to determine how to take them out. It’s not an easy thing, especially with this type of enemy. “The counter-ISIL plan has been put in skeleton form,” Mattis stated. “It’s being fleshed out now. It has to be done in a methodical way where we look at each element of it. A couple weeks ago, Secretary Tillerson had 60, 68 nations in town with his counterparts, the foreign ministers,” he added. “They are working on the stabilization effort in in Syria. This is not the United States working alone — a very, very complex security situation, and it is one that we we will have to address in a methodical manner. It’s not something you can simply add water to a dehydrated plan and its all of the sudden a full-fledged plan,” Mattis stated. “This is hard work, and it’s going to take time.”

Mattis was adamant that as we hunt down ISIS and obliterate them from the face of the earth, we will not get sucked into the fiercest, most horrendous civil war on the planet right now. Our military is now faced with battles on multiple fronts. Mattis believes that ISIS should be eradicated first. I’m not a military strategist, but I do believe that at the very least they should be addressing Iran at the same time as ISIS has been used as a proxy for both Iran and the Russians. The Trump war plan for ISIS “is proceeding the way we expected it to,” said U.S. Central Command chief Gen. Joseph Votel, who also appeared alongside Mattis during Tuesday’s briefing. I’m all for wiping them out boys… faster, faster, pussycat.