I’m going to ignore the fact, that the newlyweds invited the arrogant bastard to their nuptials in the first place. Aside from indicating their questionable moral and intellect stances, the jerk is cursed and anything connected to him or that comes across his path dies. Inviting him to your wedding is like having Typhoid Mary over for tea. Having said that, does anyone truly believe he was not apprised of the moving of the wedding? That he only found out after the fact, when it became news? Maybe he’s just that dismissive and narcissistic.[1] 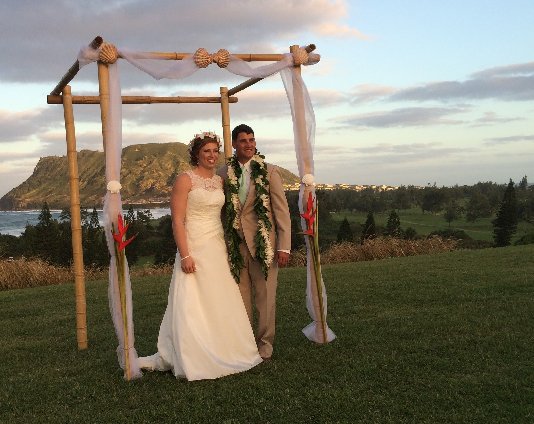 So this[3] is what his advisors had in mind when they said he feels “liberated” after the election. Now, as a late-stage lame duck, he’s free to be the d*ck he always wanted to be[4] but couldn’t for fear of the electoral consequences.

If “You’re Only President Once”[5] means anything, it means telling a pair of Army officers who’ve spent months planning their Hawaiian dream wedding that they’ll have to make way because you simply must, must golf at that very hour.

It was the second time that day that the couple heard from the nation’s commander in chief, whose affinity for golf has, at times, caused political headaches for the White House. Stationed in Hawaii and knowing the president spends his Christmas holiday on the islands, they invited him to their ceremony on a lark. They had received a letter earlier on Saturday saying Obama regretted he couldn’t come and wishing them happiness on their wedding day.

“It was kind of ironic they got the letter from them and then, within hours, they were told they had to be moved due to him,” Jamie McCarthy, Mallue’s sister, said in an interview. “It was emotional, especially for her—she’s the bride and in less than 24 hours they had to change everything they had planned.”…

[A]nyone planning an event at the course when the president may be in town is warned about the potential for last-minute shuffling, said Naile Brennan, manager of K Bay Catering, which was handling logistics for the wedding. Brennan said they had other sites ready to go, and the couple ended up choosing the lush, green lawn near the home of Colonel Eric Schaefer, the commanding officer of the base, which offers an elevated view near the 16th hole.

I’m tempted to call this The Most Obama Thing Ever but realistically it is and can only be number two on that list[6]. To make it to number one, O would have had to tee off while standing underneath the couple’s trellis, the ball perched atop a champagne glass engraved with their initials, while the bride sobbed quietly in the background. He’s got two years as president left; I give him 50/50 odds of making it happen eventually.

He did end up calling the bride and apologizing — after Bloomberg Politics called the White House and asked for a comment on what happened, alerting them to the fact that a story was in the works. Exit question: O’s approval rating within the military is 15/55[7] according to the most recent Military Times poll. What’ll it be next month once Drudge inevitably picks this up?

Of course CNN, being the good lapdog media sycophant they are[8], bloviates on how wonderful it is that the president deigned to call the happy couple. They gushed it was the wedding video to end all wedding videos. I quote: “There are not many newlyweds who can say they received a call from the President of the United States on their wedding day.” Well, thank God for that. This is so mind-numbingly callous and selfish, I can’t begin to express it. It’s always all about him and his damned golf. No wonder the military overwhelmingly can’t stand this asshat. He can’t lead, he can’t fight, he can’t win, he hates them, he’s trying to get them killed and now he’s trying to drain all the happiness from this military wedding day – but hey, he still sucks at golf.