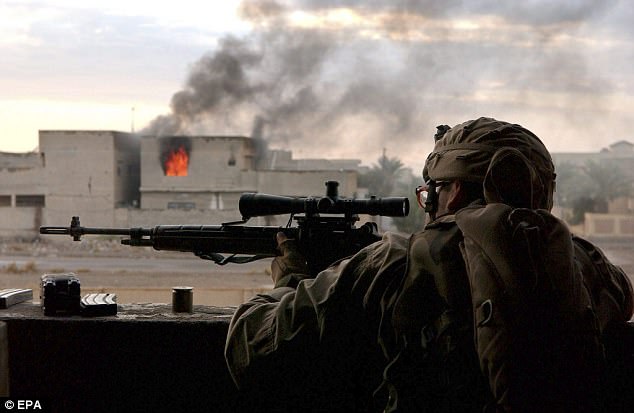 While we don’t know the name of the sniper, we know that the tool he is using is a piece of beautifully engineered marksmanship produced in South Carolina and retails at a cost of over $13,000.

The CheyTac M200 Intervention gun is so accurate at long distances that it took 3 seconds for one bullet to travel the 1.5 miles to directly hit a terrorist’s throat in the city of Mosul, Iraq. The m200 is considered one of the most powerful rifles in its class and with its range of up to 3,000 meters (1.86 miles), it also holds the record for the world’s longest shot. Since one shot is all it took to remove this Jihadi, it’s probably a good time to nod at CheyTac’s motto, “Make every shot count.”

The event took place a few weeks ago, but is only now being released in detail to the public. According to The Daily Mail[2]:

As the terrorist was leaving a burned-out building two weeks ago, the SAS gunman is said to have pulled the trigger, registering one of the most difficult kills in the regiment’s history.

“It was a classic counter-sniper operation. The ISIS gunman was moving all the time to get into the best position to get a kill.

“The SAS team had him in their sights on several occasions but did not have the time to get a shot off. At such a long range there are so many factors which can affect the flight of the bullet.

“It was like a game of cat-and-mouse and at one point the SAS almost gave up, believing that the terrorist had gone to ground.

“He certainly knew how to use the ground to his advantage and had clearly received military training.”

Looks like American ingenuity won this over the ISIS militant who was using a Russian Dragunov who had previously wounded British soldiers.