So, ISIS Militants Attempt Using Artillery On U.S. Forces. Let’s Just Say That It Didn’t Go Over Too Well [Video]

Well, boys… that artillery there makes a mighty fine[1], rather large target. Looks like the US obliged their hubris and blew it up. What’s more, the Jihadis didn’t seem all that surprised or flustered. If you are going to lob artillery at US protected allies, you can predictably expect to be blown to bits. Makes for great fireworks. 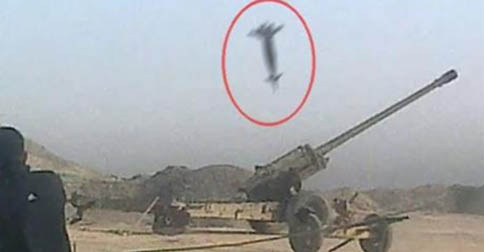 An ISIS fighter filmed his fellow terrorist pals trying to use artillery against its enemies, which were being covered with U.S. air support. What happens next, well… is just plain predictable.

One commenter said that you could say that the missile coming from on high was the finger of Allah delivering a message to them… I love that sentiment, but I would say it was God and not Allah. I don’t think ISIS really cares about having stolen artillery blown up in the grand scheme of things. It’s just a minor glitch on the radar when furthering the Caliphate. They are just as happy with a more intimate form of slaughter where they can personally experience the murderous violence and death. ISIS has hardly been slowed at all and they will keep up their death march until someone gets serious about taking them out. That won’t be Barack Obama.