Our men and women in the military defend our freedoms, so why is one of our most essential rights — the right the bear arms — denied them? In the wake of the Chattanooga shooting, Todd Starnes says that it’s time to arm our Armed Forces. 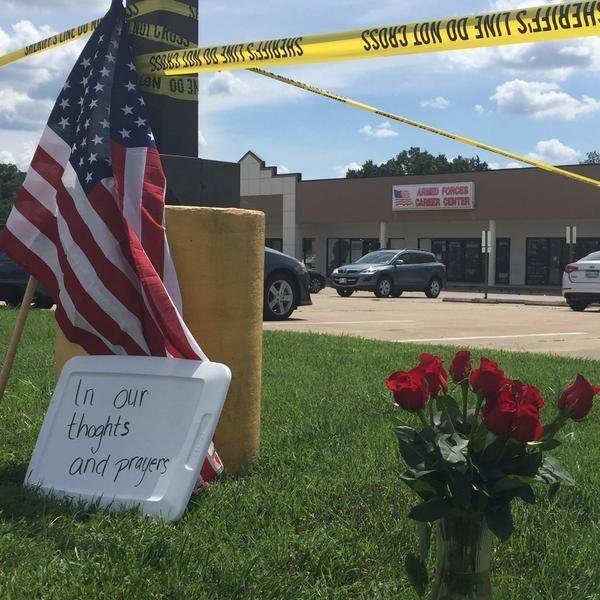 It turns out that at least one of the two military facilities attacked in Chattanooga, Tennessee — was a gun-free zone.

If you looked closely crime scene photographs – you can see the sign — plastered on the front of a bullet- riddled window.

Four Marines were slaughtered — a fifth wounded — along with a Chattanooga police officer.

Authorities say the gunman, identified as 24-year-old Muhammad Youssef Abdulazeez, was killed in a shoot-out.

Abdulazeez is reportedly a Kuwaiti-native who attended high school in the Chattanooga area. The Times Free-Press posted his graduation photo – that included the phrase; “My name causes national security alerts. What does yours do?”

… As many as 50 shots were fired — and all the survivors could do was barricade themselves inside.

The brave men and women who staff these military recruiting stations are sitting ducks. Soft targets – is the terminology they use.

The same thing happened at the Fort Hood massacre.

In response to the shooting Homeland Security ordered enhanced security measures at federal buildings. Since they can’t carry weapons what are they going to do? How are they going to defend themselves against the next Muhammad Abdulazeez — lock the doors, pull the shades?

It’s time to arm the Armed Forces. Now, I’m sure the experts will say there’s some sort of logical reason why military personnel should not have access to firearms – but I’m not convinced. Brave Marines gunned down in a Southern city — and that is something we cannot abide. Our elected leaders must give them at least a fighting chance.

It makes absolutely no sense that Marines and Airmen and Sailors and Soldiers who defend our nation are unable to defend themselves – on American soil.

There’s really no reason to not allow service members to arm themselves, and there are multiple incidents that, from Chattanooga and Fort Hood, to the Navy Yard shooting — prove why it’s necessary. We’re talking about highly trained members of the military, who would be more than capable of stopping an active shooter as soon as they open fire, and countless lives could be saved. If only we would just let them.