The National Guard Targets Constitutionalists As The Enemy 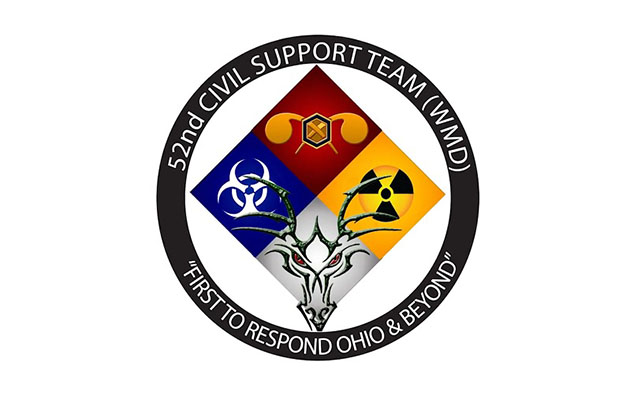 Okay… before I get into the tyranny part of all this, can I just ask what the hell is up with this logo/badge or whatever it is? I get the three top symbols, but the horned goat head is just downright creepy and suggestive of Baphomet[2], which is just plain evil. If the National Guard there wanted to look edgy, why not a wolf, bear or something else fierce in nature? Did you have to go to hell to get your graphics done? Just sayin’. Maybe demonic visages are chic now and fitting.

I wrote an article last week that went viral, but was disparaged roundly in certain quarters: Idaho Opens the Door to Martial Law and Gun Confiscation — the Nullification of the Posse Comitatus Act[3]. In the article, I point out the blatant militarization of our police and the use of the National Guard as a “privatized” military for the government. That was last week…[4] Things just keep getting more and more alarming in the new and improved ‘reformed’ America. 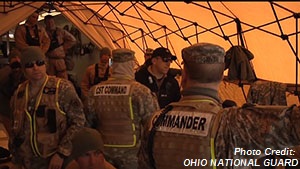 Remember this prophetic declaration by Obama?

“We cannot continue to rely only on our military in order to achieve the national security objectives that we’ve set. We got to have a civilian national security force that is just as powerful, just as strong, just as well-funded.” ~ Barack Obama

Well, he meant every word. In January of this year, the Ohio National Guard’s Civil Support Team conducted a drill that involved right-wing extremists committing acts of bioterrorism. The training depicted “anti-government” rightwing nut jobs as domestic terrorists. The National Guard is now actively training against American patriots who believe in the Second Amendment and the Constitution. This is going on all over the country and I have written on it multiple times.

This is the context[5] on which the drill was based:

The make-believe scenario is timely. Two school employees who are disgruntled over the government’s interpretation of the Second Amendment, plot to use chemical, biological and radiological agents against members of the local community.

Portsmouth Chief of Police Bill Raisin told NBC 3 WSAZ-TV in Huntington, West Virginia that the drill accurately represented “the reality of the world we live in,” adding that such training “helps us all be prepared.”…

The ONG team discovered biological weapons being produced in the school, requiring activation of containment and decontamination procedures.

Participants in the disaster drill located documents expressing the school employees’ “anti-government” sentiments, as well as a note identifying Pierce as the fictional right-wing terrorists’ leader.

I’d laugh if this wasn’t so serious. Really? The production of bioweapons in a school? And exactly, how do you poison food with mustard gas? And because everything now has to do with race and we all know rednecks in flyover country are crazed, rabid, evil SOBs… we’ll just throw in the KKK for good measure. So, they made school employees into bioterrorists and racists with evil black guns. How very fascist of them. And why is this ‘timely?’ Has there been some rash of bioterrorism across America I was unaware of?

It’s hard for anyone not to see this for what it is now. The police forces are being militarized and the National Guard is being used as an extension of that police force and they have American patriots in the crosshairs. DHS and other agencies are buying up more and more ammo. The latest was the Post Office and now DHS is snapping up sniper ammo[6]. Either they are trying to buy up[7] so much ammo that it acts as backdoor gun control, or the government is prepping for something very, very nasty. Our Founding Fathers are screaming at us from the grave.

And don’t forget that while the Ohio National Guard practices taking ordinary Americans out, that a National Guardsman was caught there in January with 48 bombs in his car[8]. There are dangerous people everywhere and in every walk of life, but the irony of this guy being caught during the time they were running this drill is not lost on me.

What bothers me most of all, is the police who we have trusted our whole lives are sanctioning and justifying these drills[9]:

Portsmouth Chief of Police Bill Raisin told NBC 3 WSAZ-TV in Huntington, West Virginia that the drill accurately represented “the reality of the world we live in,” adding that such training “helps us all be prepared.”

I’d just like to ask Chief Raisin exactly how this represents reality? You are not addressing the true terrorist threat. Nope – you are going after those who criticize the government (and rightfully so) and those who want to keep their Constitutional rights and not submit to a dictator’s tyranny. This might help you be prepared, but it definitely helps us see whose side you are on and what we can expect. When cornered on explaining this drill, public officials scattered. They couldn’t get away fast enough[10]. You all should be ashamed for betraying your countrymen. Instead of calling Second Amendment advocates terrorists, you should look to the enemies within and to Islamic terrorists[11]. Terrorism at this point is much more likely to come from the Left or our government.

This is the second time the Ohio National Guard has done this. They participated in a similar drill involving Left-wing terrorists with Athens County first responders last year. Then they walked it back and public officials apologized for that training the next day in response to complaints from local environmentalist groups. But there have been no apologies to Constitutionalists, to gun owners, to the American people… and I wouldn’t hold your breath. The propaganda continues apace to paint conservatives as extremists and terrorists, eventually justifying their rounding up, imprisonment, reeducation and execution. It’s only a matter of time at this rate. All of America sees it coming, like deer in the headlights.

As the National Guard targets Constitutionalists as the enemy, why aren’t we actively exposing and going after the enemies within[12] on both sides of the aisle? Some of us are as we gear up for the November elections. Trevor Loudon[13] and I are getting ready to release a series of summaries[14] on different Progressives running for office and their actions will be highlighted. They can be used in blog posts, passed out as fliers, mailed and splattered across the country. Time to clean House and Senate – time for true conservative Constitutionalists to ascend.

Update: I am told it is a dragon on the badge. I still think it is creepy and evil.