Tim Huelskamp: The Military Needs To Stop Going After Christians and Conservatives

Under Barack Obama’s leadership, our military has become increasingly hostile to Christianity and there’s at least one Republican Congressman who has had enough of it[1]. 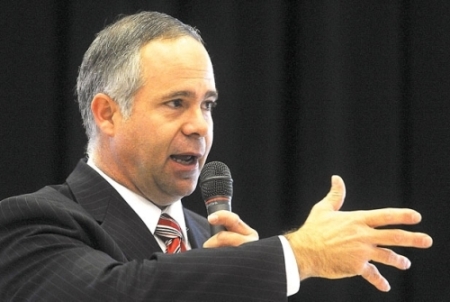 A Midwestern lawmaker is calling on his colleagues in Congress to offer cover to an Army soldier under fire for his conservative political views and religious faith, and accusing the Obama administration of “creating a tyrannical culture of political correctness in the military.”

Rep. Tim Huelskamp, R-Kan., is introducing an amendment to the National Defense Authorization Act that would prevent the Army from conducting a court martial of Master Sgt. Nathan Sommers until the military first files a report for Congress to review.

“The Secretary of the Army shall provide to Congress a report on activities with respect to Master Sergeant Nathan Sommers at least 90 days prior to taking any further disciplinary or administrative action against that individual,” states Huelskamp’s amendment.

Sommers, a decorated member of the U.S. Army Band, came under intense scrutiny after he was found with pro-Republican, anti-Obama bumper stickers on his personal car. An Army officer informed the solider — in writing — that the stickers were creating “workplace tension.” The 25-year military veteran was also told to stop reading books written by conservative authors while in uniform. A superior officer told him that reading books by Mark Levin, Sean Hannity and David Limbaugh was offensive to other soldiers.

Last summer, Sommers was investigated and reprimanded for serving Chick-fil-A sandwiches at his promotion party after the fast-food chain became a rallying point for opponents of same-sex marriage due to statements by the company president.

“In honor of [Don’t Ask, Don’t Tell] repeal and Obama/Holder’s refusal to endorse [the Defense of Marriage Act], I’m serving Chick-fil-A at my MSG promo reception for Army today.” Sommers tweeted about the party.

The military asks a lot from our soldiers, but when it persecutes them for their conservatism or their Christianity, it’s asking too much. It’s good to see at least one Republican in Congress saying exactly that.