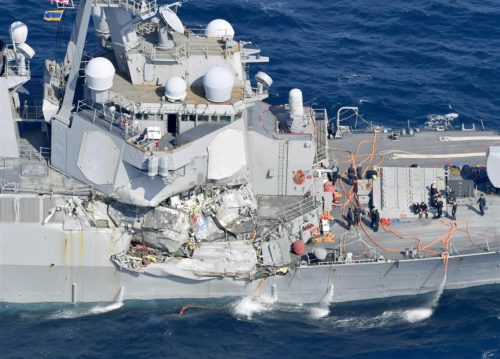 This past Saturday morning, while most sailors aboard were sleeping in their berths, the USS Fitzgerald[2] was involved in a collision with a Japanese operated, but Philippine flagged cargo ship, the ACX Crystal. It is unclear at this time which ship hit the other, but the damage to the Fitzgerald was extensive and right in the middle of the ship, while the cargo ship was damaged on the bow.

The collision caused flooding in the sleeping compartments and resulted in the loss of seven US sailors’ lives. There were no injuries on the Crystal, according to the parent company.

U.S. 7th Fleet Commander Vice Admiral Joseph P. Aucoin said, “I ask that you [keep] your thoughts and prayers for the family members and the crew.”

Aucoin described the damage done by the container ship as “a big gash underneath the water line ” and that the crew fought to keep it afloat.

Aucoin also added that, “They had to fight the ship to keep it above the surface. So it was traumatic. I can’t tell you how proud I am of the crew for what they did to save the ship.”

Commander of the U.S. Pacific Fleet, Admiral Scott Swift stated, “Right now we are focused on two things: the safety of the ship and the well-being of the sailors.”

Some family members of those stationed on the ship were relieved to know their loved ones were fine. One grandmother, Rita Schrimsher, said of her 23 year-old grandson Jackson, “Just heard the sweetest voice and saw a wonderful face. He’s okay. Thank you all for the prayers.”

But other families will not receive that good news. The names of the seven sailors who lost their lives serving their nation are:

May they Rest In Peace. And may their sacrifice never be forgotten.

Additionally, the captain of the ship, Commander Bryce Benson, was injured when his stateroom was hit in the collision. He suffered a head injury and was airlifted to the U.S. Naval Hospital in Yokosuka. He was listed in stable condition.

Our thoughts and prayers and deepest condolences are extended to the families and loved ones of these seven sailors. May they always have fair winds and following seas.