Other than Obama himself, no one personifies the Obama era better than Private Bradley Manning. In a spiteful funk because he was having a spat with his homosexual partner, Manning released nearly three-quarters of a million classified or unclassified but sensitive documents, endangering the lives of any number of Americans and American allies. Rather than the prompt execution for treason that he had gone out of his way to deserve, he was allowed to make a spectacle of himself in prison, writing leftist screeds for the Guardian, changing his name to Chelsea, demanding a sex change operation on the taxpayer’s dime, et cetera. Obama, apparently sensing a kindred spirit, commuted his sentence, underscoring why swift capital punishment is absolutely essential for some criminals. Manning responded by denouncing Obama as a weak leader in the Guardian.

The traitor is scheduled to be released tomorrow. Now we read this:

Manning, the transgender soldier and convicted national security secret leaker, will remain an active-duty, unpaid soldier, eligible for health care and other benefits, following [his] scheduled release May 17 from military prison at Fort Leavenworth, Kansas, according to the Army.

Bradley had better hurry up with that sex change operation.

While in prison Manning had received hormone treatment and care for gender dysphoria. [He] had also been informed that [he] was eligible for sex reassignment surgery to be paid for by the government. However, if the appeal of [his court-martial] conviction is denied, [he] could be dishonorably discharged, which mandates a loss of benefits including health care.

Not exactly justice, but it’s about all we can hope for, short of a visit from karma in the form of a horrific accident. 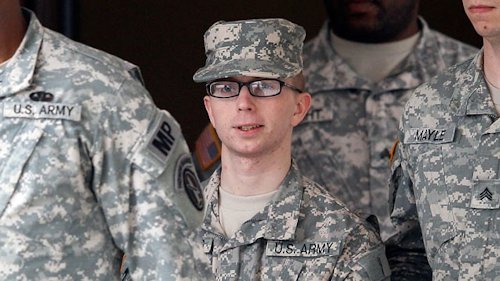 Next comes his own show on MSNBC.

On tips from Sufferfortribe, Scott D, Steve A, and Steve T. Cross-posted at Moonbattery.