VIDEO: A Bystander Asks a Man in Military Uniform Some Basic Questions About His Service – His Answers Sparked An Explosive Exchange!

This is the kind of stuff that just burns my biscuits. To be clear: I AM NOT A VETERAN. I DID NOT SERVE IN THE MILITARY. However, I have MANY family members in almost every branch of the service, and I know how hard it is to go through boot camp, the pain of being deployed, the joy of the safe return home. I am proud of my sister’s Marine service, my cousins in the Navy and Coast Guard, the people now passed on in my family that have served. This fellow, who hasn’t served a day in his life, is trying to pass himself off as a solider for a few bucks worth of booze? What a disgrace:[1] 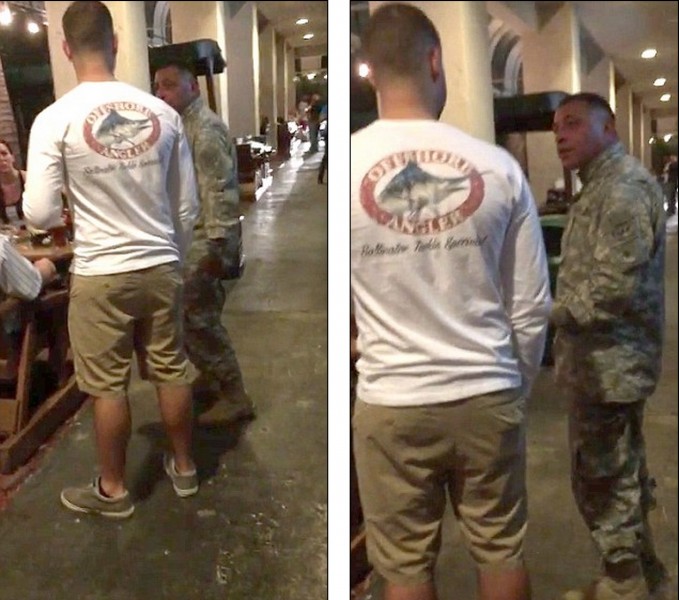 A furious bystander was captured on video accusing a man dressed in uniform of “stolen valor” at a bar in Sunrise, Florida, sparking a heated exchange that appeared to have nearly spun out of control.

Eric Coins uploaded the video of the confrontation on YouTube on April 10, alleging that the man dressed in a “battle ready uniform” was trying to pick up girls and get “sympathy drinks” by pretending to be a soldier. In the video’s description, Coins said the man got tripped up after a few basic questions and couldn’t even say where he received his infantry training for boot camp.

Things got immediately tense after Coins finally came out and accused the man of committing a “federal offense” by pretending to be in the military. Federal law prohibits the impersonation of a military officer if the individual is attempting to obtain money, property or other “tangible” benefit.

“Do you know know where infantry camp is? It’s in Fort Benning, Georgia,” Coins is heard saying in the video. “Do you realize what you are doing is a federal offense?”

Moments later, the situation went from uncomfortable to explosive as both of the men started screaming at each other. Coins repeatedly asked the man where his Geneva Convention ID card was, but didn’t get an answer.

“That’s a federal offense! There are people who f***ing die in that uniform!” Coins says in the video.

What a clown. This loser is an absolute joke to the men and women that have dies to serve and protect our country. It disgusts me that the Stolen Valor Act is even needed, but sadly, it is. This joker needs to pay the piper for this one, and I hope the government tracks him down like the low-down, yellow-belly dog he is.

WARNING: STRONG Language, May Not be SFW or Children: