VIDEO: An American Flag was Burned in Front of a School – But a Marine Stepped Up in a Classy Way

It takes a pretty despicable person to burn a flag that was flying at a playground built by Marines. But that’s what happened at a school in Springfield, Oregon — and the Marine who bought the flag reacted in the classiest way. 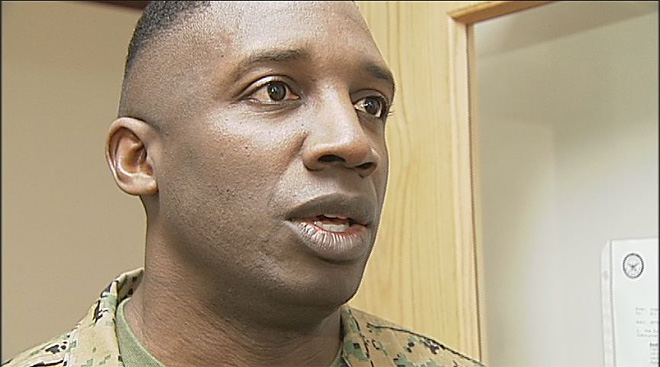 First Sergeant Reginald Daniels loves his country and the flag. The married, father of two recently volunteered with some fellow Marines to build a play ground at Brattain Early Learning Center in Springfield, Oregon. When he discovered the school didn’t have a flag, he bought one and showed the staff how to properly raise and lower it.

Then this week he got the news: somebody had burned the flag and left the burned and shriveled remains at half staff.

The Marine, who has deployed three times into combat zones, was stoic. He told KVAL-TV something that a lot of people could stand to hear:

Even though it looks like this, it still means a lot to me. I love this country and what it stands for. I know everybody has their views, but I take pride in the flag.

Then, losing his cool veneer for a millisecond, the 1st Sgt. haltingly told the reporter:

The flag is bigger than all the military services. We put the uniform on to protect it so that you and I– and the little kids in the school –can have something better.

1st Sgt. Daniels then bought the school another flag to replace the one that was burned. And while there are always going to be horrible people who will burn flags, there are also people like 1st Sgt. Daniels, who will fight to defend the flag and the country it represents — and thank God for them.