Video: The Moment Gunfire Breaks Out In Canada’s Parliament

Canada’s Parliament building was attacked by a terrorist last night and as it turns out, the Canadian Government was already aware that he was a threat.[1] 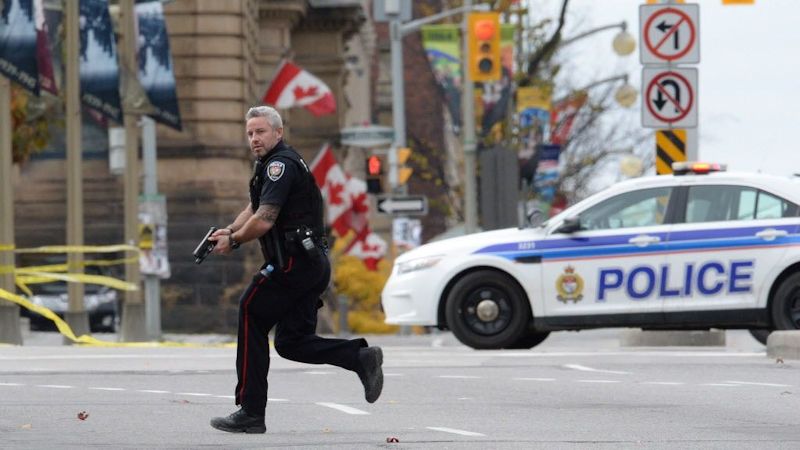 Sources told The Globe and Mail that he was recently designated a “high-risk traveller” by the Canadian government and was unable to secure the appropriate travel documentation, thus blocking his attempt to travel abroad. The circumstances are similar to that surrounding the case of Martin Rouleau-Couture, the Quebecker who was shot Monday after running down two Canadian Forces soldiers with his car.

Mr. Zehaf-Bibeau was born in 1982 and was the son of Bulgasem Zehaf, a Quebec businessman who appears to have fought in 2011 in Libya, and Susan Bibeau, the deputy chairperson of a division of Canada’s Immigration and Refugee Board.

Gunfire erupted at the National War Memorial around 9:52 a.m. (ET), then moved to Parliament Hill’s Centre Block. The Parliament Hill shooting was captured on this video by a Globe reporter. One Parliament Hill guard was shot in the leg, treated in hospital and was later released.

The outbreak of violence sent MPs into hiding and all federal government buildings into lockdown, which wasn’t lifted until late on Wednesday evening.

So apparently, the Canadian government already knew this guy was dangerous enough to designate him a “high-risk traveller.” Should he have already been in a jail cell somewhere? Was he given a break because his mother was a bigwig in the government? The Canadian people deserve answers to those questions. They deserve to know about the man who fired off these shots in their Parliament building.