Vietnam Vet FINALLY Awarded With Medal Of Honor From Trump – His Story Is INCREDIBLE!

President Trump will award the Medal of Honor[1] to a Vietnam vet who lost his brothers on a Vietnamese hill… he didn’t think he would survive either, but he did. Jim McCloughan is a true hero and he’s about to finally be recognized for it. He saved the lives of ten men in the Battle of Nui Yon Hill on May 13-15, 1969. He will be the first vet to receive America’s highest military honor from President Trump. He’s very excited about the event and he should be. It’s a pity he was not recognized for his bravery long ago.

This guy risked his life nine times to save his men. That takes incredible courage. He didn’t think… he just did. I can’t imagine running 100 meters in an open field through enemy crossfire. No wonder he thought he would die. Even though he was wounded by shrapnel, McCloughan would not leave the hill or his brothers in arms. “I knew that they were going to need me. I wasn’t going to leave my men. Nope,” he said, while admitting that “I thought that would be my last day on Earth, though.” 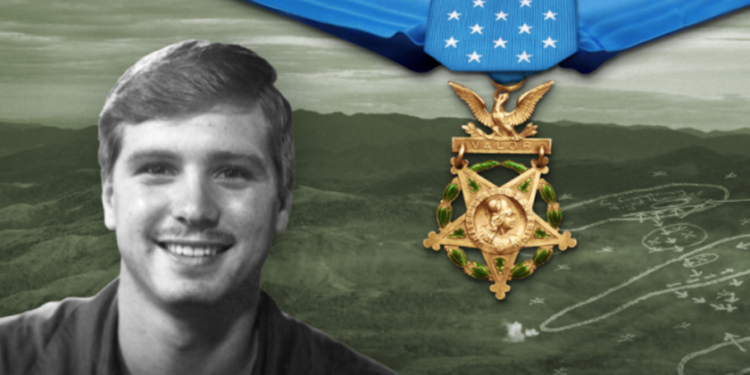 A man who never expected to live past the May 1969 battle where he saw his comrades shot down on a Vietnamese hill will receive the Medal of Honor from President Donald Trump in July.

Jim McCloughan, who helped to save the lives of 10 wounded men in the Battle of Nui Yon Hill on May 13-15, 1969, will be the first veteran to receive America’s highest military honor from Trump.

“President Donald Trump will be putting that on me for the first time in his experience of doing such a thing,” the former combat medic said. “That’s pretty special.”

McCloughan “voluntarily risked his life on nine separate occasions to rescue wounded and disoriented comrades,” the White House said in a statement[9].

“When the squad and crew members reached the company perimeter, a wounded soldier was laying on the ground, too injured to move,” according to the official award narrative. “McCloughan ran 100 meters in an open field through the crossfire of his company and the charging, platoon-sized North Vietnamese Army. Upon reaching the wounded soldier, Pfc. McCloughan shouldered him and raced back to the company, saving him from being captured or killed,” the narrative said[10].

Inside story of Vietnam #veteran[11] James McCloughan's acts of valor that led to the Medal of Honor: @MeghannReports[12] https://t.co/Z5wJg8tyqG[13] pic.twitter.com/KxNAYls6EF[14]

“I’m not a hero,” McCloughan said. “I just did my job. I’m not a hero. There’s a bunch of heroes there, a bunch of heroes. You know, any veteran will tell you the real heroes, they’re not here with us. I feel honored to be able to accept this for the 89 men that fought that battle,” McCloughan added. After McCloughan got out of the military, he became a high school teacher and a coach. He’s done that for 40 years. He was originally recommended for the Distinguished Service Cross, but was later awarded a Bronze Star with “V” device. His former platoon leader revived McCloughan’s case in 2009. Former Defense Secretary Ash Carter upgraded it to a Medal of Honor. He has more than earned the distinction.

An Army captain called McCloughan and told him he had the President of the United States on the phone for him. “I said, ‘Can my wife pick up another phone?’” McCloughan asked. “This medal is all about love,” McCloughan said. “It’s a love story so deep in my soul that’s it’s truly immeasurable.” This guy really doesn’t consider himself a hero, but he is. He’s a great choice for being first in line to receive the honor from the President as well.