Ferguson protesters claim that they’re fighting for some kind of warped sense of justice, but it’s hard to imagine how that makes sense, considering their actions. In addition to looting, arson, and attacking police officers, they also stomped on an American flag… and this veteran was NOT having it. 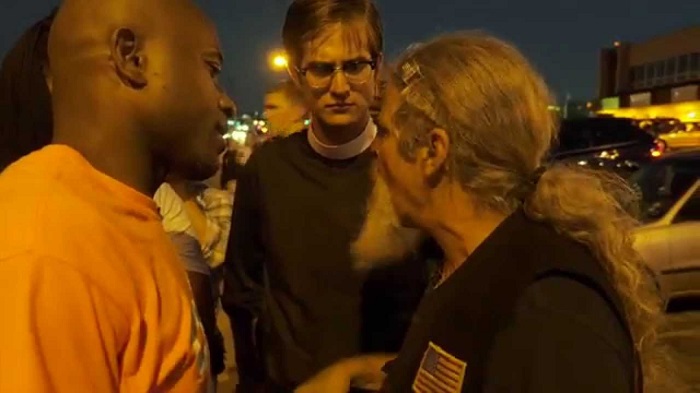 Man who says that he fought for this flag confronts protesters. #Ferguson[2] pic.twitter.com/znfGDFEdJb[3]

How do throwing rocks and frozen water bottles at cops, looting local businesses and chanting “we ready for war” fit into so-called peaceful protests marking the anniversary of the death of Michael Brown? Yeah, I have absolutely no idea either.

How about stomping on an American flag? Still no freaking idea.

But apparently, at least one protester feels stomping on this symbol of our nation’s hard-won, precious liberty is relevant to the message they’re attempting to convey in Ferguson, Missouri.

As shown in a video tweeted Monday evening by Indianapolis-based reporter Patrick Calvert, things got tense when a veteran confronted this flag-stomping protester.

“I fought for this flag,” the man told a small group of demonstrators. “What’s he doing to my f***ing flag?”

“We’re doing this to your f***ing flag, n*****,” a protester grinding his feet into the flag responded.

First, appreciate how the “N” word has become an all-purpose expletive blacks can apply liberally to whomever they choose.

Now, wouldn’t you love to ask the protester what, exactly, the American flag is “doing to” him? Notice how he calls it “your flag”; clearly, he does not have any sense of pride or ownership of this great nation (yeah, I know, the first clue might’ve been him stomping on the flag itself). Perhaps someone might clue him into the fact that flags don’t do anything to people; people do. And maybe someone might direct him to look into some of the policies people — namely, Democrats — have put into place that may affect him in not such great ways.

I’d also love to ask this guy what, besides stomping on American flags in the street, HE’s actually doing to try to make a difference in this country or world? I bet if we asked that veteran, he’d have a pretty clear answer.

These people have no respect for anything — not for this country, not for authority, and not for themselves. Yet somehow, we’re supposed to respect them and their violent criminal acts they call “protests”? I don’t think so.