It may look like a ship dreamed up by a Bond villain. But it’s not — it’s the Navy’s newest destroyer, the largest one ever built, and it is awesome. 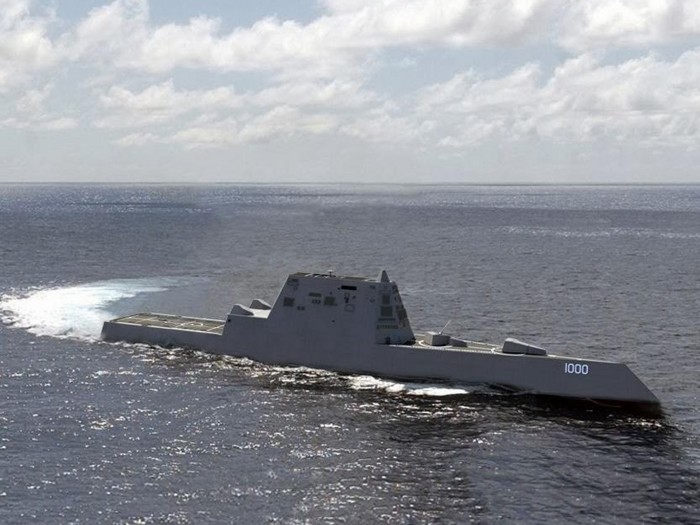 The Navy has revealed the first footage of its futuristic new stealth destroyer at sea.

The largest destroyer ever built for the U.S. Navy began its sea trials yesterday.

Future version of the radical design are expected to be used to test a futuristic ‘Star Wars’ railgun that uses electromagnetic energy to fire a shell weighing 10kg at up to 5,400mph over 100 miles – with such force and accuracy it penetrates three concrete walls or six half-inch thick steel plates.

More than 200 shipbuilders, sailors and residents gathered to watch as the futuristic 600-foot, 15,000-ton USS Zumwalt glided past Fort Popham, accompanied by tugboats on Monday.

The $4.3bn ship departed from shipbuilder Bath Iron Works in Maine and carefully navigating the winding Kennebec River before reaching the open ocean where the ship will undergo sea trials.

Kelley Campana, a Bath Iron Works employee, said she had goose bumps and tears in her eyes.

‘This is pretty exciting. It’s a great day to be a shipbuilder and to be an American,’ she said.

It certainly doesn’t hurt the coolness of the ship that the captain’s name is James Kirk, too. Pay attention, folks — this is what the future looks like.