It couldn’t happen[1] to a more deserving asshat. The pinnacle of President Trump’s speech this week was when he formally recognized the widow of fallen Navy SEAL William “Ryan” Owens. Carryn Owens got an ovation for over two solid minutes as tears streamed down her face and she looked to the heavens and told Ryan how much she loved him. Democrats refused to stand and clap. It was a disgrace. But it didn’t stop there… a former Hillary Clinton operative sent out a vile tweet after the speech: “Sorry Owen’s wife, you’re not helping yourself or your husband’s memory by standing there and clapping like an idiot. Trump just used you.” That was liberal activist Dan Grilo. And it got him canned.

Retired Navy SEAL Derrick Van Orden came across the tweet and wrote a letter to Grilo’s employer. Grilo deleted his tweet and then his whole account, but alas… the Internet is forever. Van Orden demanded Grilo be fired from Liberty Advisor Group and they complied. Good. That’s what should have happened to the dirt bag after disrespecting a fallen hero and his widow. Who does that? The tweet was extremely inappropriate and absolutely heartless. Figures it is one of Hillary’s guys. 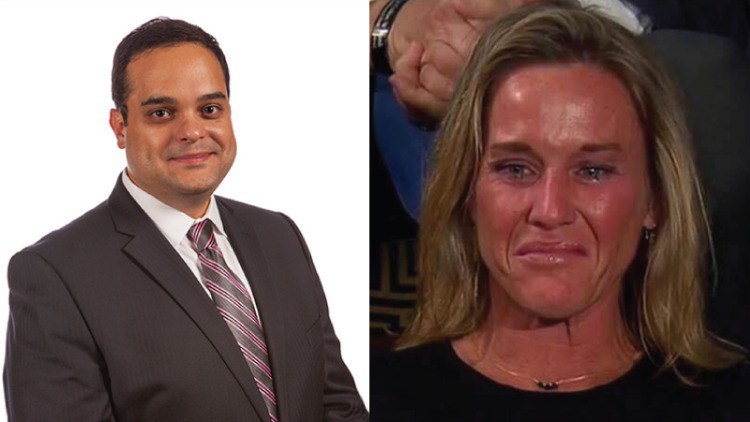 The former Hillary Clinton volunteer who bashed a Navy SEAL widow has been given the boot by his employer.

Chicago-based Liberty Advisor Group, Grilo’s employer, fired him stating that his tweet was “inconsistent with the Company’s values,” according to Fox News.

“You do not insult our widows and expect to get away with it,” he said on “Fox & Friends” Thursday.

In his letter, Van Orden said Grilo “in the basest terms, degraded the memory of one of my fallen Navy SEAL brothers by insulting his wife on a public platform.”

He told the company Grilo had “brought shame upon himself” and on them if he remained employed with them. He later contacted the company’s CEO to thank him for dismissing Grilo.

Van Orden described the tweet by Grilo as “beyond the pale,” and “wholly inappropriate.”

Van Orden also praised President Trump after others accused him of using Owens as a political prop. Honoring Owens that way and showing his widow as a “symbol” for Gold Star widows and widowers was “an incredibly classy thing to do,” Van Orden said. I agree. Trump made this SEAL the center and high point of his speech. He gave him the highest honor he could. And after the speech, President Trump went out of his way in the hall to give Carryn Owens a hug.

“She is a strong woman that has displayed grace in the presence of hurt,” Van Orden added. “Mr. President,” Van Orden said, addressing Trump directly, “you earned my respect and the respect of my fellow SEALs by doing this. And if you need anything, you give me a ring.” The military loves Donald Trump and this is why. He loves and honors them right back. Warriors are going to fall while the fighting rages, but a Commander-in-Chief who puts their sacrifice front and center is a true leader and friend to our service members.