Fight for $15 Is Denounced as Racist

These days most everything is racist, including even the leftist drive to raise the minimum wage to $15/hour. From the Detroit News:

Minimum wages require businesses to pay more for employees than they are “worth” in the marketplace. If the cost of hiring employees increases, business owners will be incentivized to hire only employees with longer employment records and more credentials, discouraging employers from hiring younger individuals with fewer skills and shorter resumes.

That’s why minimum wage hikes hurt younger workers who are trying to get onto the first rung of the ladder. But there is another group that minimum wage hurts:

[P]ricing new workers out of the system by increasing the minimum wage disproportionately impacts other disadvantaged groups, such as people of color. Nearly three out of every 10 African-American teens are jobless, according to [the Bureau of Labor Statistics]. White teens are unemployed at about half that rate.

Hot Air doesn’t get it:

Obviously the charge of racism … is farcical because the policy is equally applied to everyone.

Au contraire. Minimum wage is racist precisely because it is equally applied to everyone. Blacks deserve special treatment because they are “oppressed.” Anyone who denies this is a racist.

If liberal authoritarians wanted to help blacks economically, they would impose a minimum wage only for whites. That would drive down black unemployment sharply. It would also make liberal heads explode.

Since Democrat officeholders would rather keep blacks poor, angry, and reliant on the government, it would make more sense to raise the minimum wage only for blacks. They could sell it as slavery reparations. 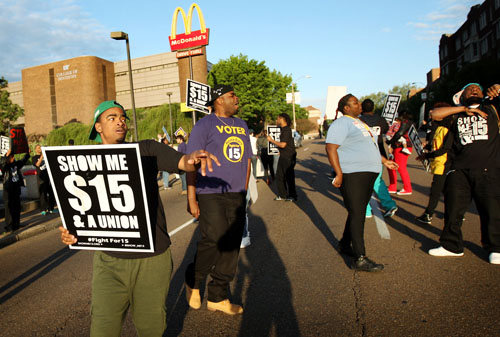 Idiots demanding to be forced into unemployment.