A fast food worker in Austin, Texas[1] stood her ground when a pack of “Fight for 15” protesters invaded the Taco Bell where she works. It turns out she has some common sense and a definite work ethic. When the protest leader asked her to join them on strike, she bluntly told him she had a job to do and they should leave. It’s obvious the girl just wanted to do the job she was being paid to do. She wanted to be left alone and not be harassed. She seems to realize that the Marxist move to demand this massive increase in pay will result in jobs lost and fast food outlets going to computerized ordering. She also knows that the market determines wages and a job is a fair exchange of money for services. Going on strike and demanding more than a service is worth is a good way to be unemployed. 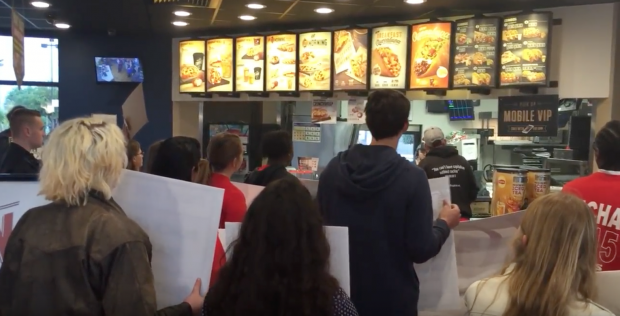 A group of “Fight for 15” protesters invaded a Taco Bell restaurant in Austin, Texas, on Thursday and invited a worker to go on “strike” to demand more money and better working conditions.

The protesters’ message wasn’t well received by the employee, who said she just wanted to do her job.

After one protester informed her it was a “day of action,” the employee responded sharply, “This is also a job that I am trying to do.”

“Y’all are hindering my work, you may leave the building,” she added.

The apparent leader of the protest still finished his speech and invited her to go on “strike” and join the protest — but she didn’t seem interested in the least.

Someone who is ethical and a hard worker inherently realizes that radicals like these are wrong. Not everyone out there is a clueless Marxist. Most of us just want to do our work and be the best at what we do. We don’t want unions and commie radicals demanding we join their ranks. Growing up in a union family, my first thought was that I hope that there are no repercussions for her saying no to these clowns. That’s the union way. These losers are going to keep it up until almost all of them are out of work… McDonald’s is already automating kiosks. Computers and robots are taking the place of fast food workers all over the place. Pretty soon, that $15 an hour they are demanding will become zero and they will find themselves without any employment at all. I don’t think that’s the progress they were looking for.