The names Clinton and Trump aren’t the only truly crazy things to appear on ballots this year. Several states have initiatives to impose higher minimum wage. Unless the object is to drive more low-wage workers out of the workforce and into the waiting arms of the welfare state, they are a bad idea:

The real losers from these costly campaigns are small businesses and nonprofit service providers whose customers can’t afford to pay the higher cost of a higher minimum. Steve DiMillo, who runs a local restaurant in Portland, Maine, that his father started more than 40 years ago, put it this way: “There’s a limit to how much people want to pay for a bowl of chowder and a beer.” He’s calculated that the [proposed] 220% pay increase for tipped employees—who already make as much as $35 an hour in tips—will cost his company over $600,000 a year it doesn’t have.

In Arizona the president of the In-Home Care Association, Mark Young, warned that a costly pay raise for care providers would put in-home services out of reach for some seniors and the disabled. Similarly, the owner of a Visiting Angels caregiving franchise in Tacoma, Wash., Kelly Chambers, surveyed her customers and found that nearly 90% would cancel or reduce their care services if prices went up in response to the wage hike.

Small business owners go out of business, employees lose their jobs, and old people go without homecare — but at least union labor is protected from competition, and the Democrat Party can count on more votes from young people rendered unemployable by liberal policies and therefore dependent on government handouts. 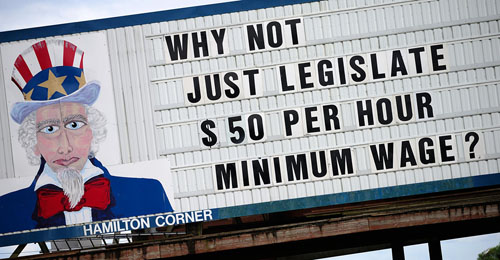