The restaurant industry is a canary in California’s coalmine of moonbattery. Minimum wage insanity is killing it:

Consider San Francisco, an early adopter of the $15 wage. It’s now experiencing a restaurant die-off, minting jobless hash-slingers, cashiers, busboys, scullery engineers and line cooks as they get pink-slipped in increasing numbers. And the wage there hasn’t yet hit $15.

As the East Bay Times reported in January, at least 60 restaurants around the Bay Area had closed since September alone. …

Another telltale is San Diego, where voters approved increasing the city’s minimum wage to $11.50 per hour from $10.50, this after the minimum wage was increased from $8 an hour in 2015 – meaning hourly costs have risen 43 percent in two years.

The cost increases have pushed San Diego restaurants to the brink, Stephen Zolezzi, president of the Food and Beverage Association of San Diego County, told the San Diego Business Journal. Watch for the next mass die-off there.

It’s bad enough in big cities on the coast. Wages, like prices, are lower inland and in smaller towns. That means that one-size-fits-all central planning is even more unsupportable regarding the minimum wage. Unemployment is already significantly higher away from the coast in California. It will soon be higher still — not that the coastal big city liberals who call the shots are likely to lose sleep over it.

As politicians insert their sausage fingers into subtle market mechanisms, scarcity and unintended consequences will ensue.

One consequence of raising the minimum wage that is so easily predictable that it is hard to call it unintended is the scarcity of jobs. Unemployed people tend to vote Democrat.

The state minimum wage in California is scheduled to jump every year. It will reach $15/hour for all employees in 2023. Each jump will cause a corresponding jump in unemployment, hardship, and if everything goes to hell smoothly, Democrat voters. 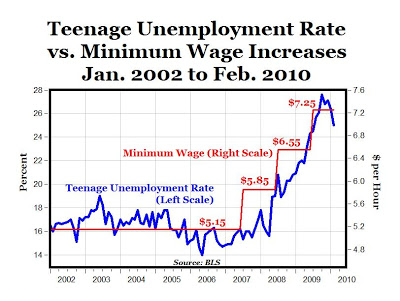