VIDEO: Young Worker’s Response To $15 Minimum Wage Will Have You CHEERING

It certainly has me cheering.[1] This young man is working at learning a skill so he can make $15 an hour. He didn’t demand anyone give him $15 an hour… he wants to earn it. I’m all for a fair wage for a job that the market will support. He doesn’t like the fact that the ‘Fight for 15’ goons are forcing employers to pay fast food workers $15 an hour, which is an unwarranted huge jump in pay. It’s something the market can’t withstand. It will drive many establishments out of business and for many, many people, it will cost them their jobs. MSNBC interviewed this kid and what he said was common sense and exactly right. 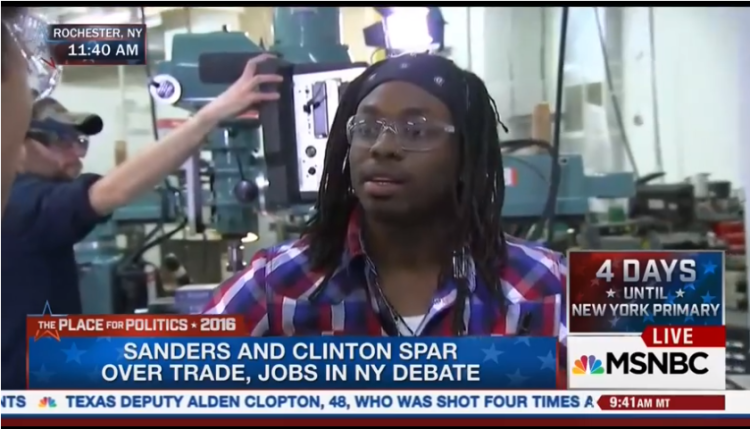 In a segment Friday, on MSNBC Live, a reporter visited a metal working class, the students were “retraining” to do more skilled and higher paying jobs.

The reporter asked one young student “You’re looking at maybe a 15 dollar an hour a job when you come out of here. How do you feel when candidates say they wanna pay someone working at a fast food restaurant the same amount.”

The student responded saying “It’s ‘kinda frustrating.” Expressing that he and many other students are having to go through much re-education, and now someone with with much less skill and education will be making the exact same amount.

This whole minimum wage thing should never have been implemented in the first place. In a free market, supply and demand dictate wages and chances are things would be better all around if the Progressives hadn’t meddled with it in the first place. The ‘Fight for 15’ is being organized and driven by radicals and Marxists. They know that this will end in disaster and that is the plan. They want to whip workers up into and emotional frenzy and crash the system. This minimum wage insanity has made prices in Seattle skyrocket and has driven tons of businesses out of the city and state. Ask yourselves who has the most to gain from all of this. Where is the money going to come from and how do you expect your employer to stay viable? These people aren’t thinking this through and they are being used. At least this young man gets it.