Sending your child to daycare can be scary, especially for a new mom, because you’re making the choice to hand over your baby to people who are, in essence, complete strangers. For one Boston mother, the people she entrusted her son to failed her in the worst way. 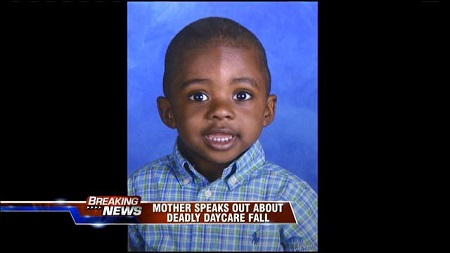 His distraught mother Leonella Rivera said she dropped the boy at the center before heading to work.

She said the day care texted her a picture of her son, showing he was happy, at around 9 a.m., but just 15 minutes later she received a call from police saying he was dead.

… Jackson told 7News that investigators believe Daylan wandered out of his first floor day care center and walked up four flights of stairs before pushing through a heavy door onto the roof. That’s when he apparently tumbled off.

Jackson is demanding to know why the toddler was left alone and how he was able to push through the door.

The story doesn’t seem to quite add up: the mother received a text message with a picture of her son alive and happy, and within fifteen minutes, not only did he climb four flights of stairs, push open a heavy door, fall off the roof and die, but police were able to get to the scene, identify him, and then call to notify her? How was a two-year-old able to climb four flights of stairs and open a “heavy” door in such a short period of time, and without anyone noticing? There has to be more to this story.

Also see: Why Does God Allow Bad Things To Happen To Good People?[3]