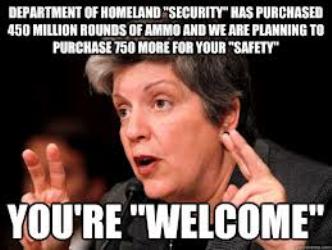 What has our Department of Homeland Security metamorphosed into? Our third largest government agency has been stockpiling weapons and ammunition at a very alarming rate. Since early 2012, DHS and its 200,000 employees have purchased so much ammunition that many of the top weapon and bullet manufacturers have had trouble keeping up with the increased demand.

Our government would never loose a wink of sleep thinking about any one of those scenarios unfolding. Our government’s enemies are not foreign, they are domestic. They are the 60 million Americans who rejected this sorry excuse for a President and are completely against his entire agenda to remake America.

When assessing the Department of Homeland Security’s actions, there is no other logical explanation or reason other than to say they are preparing for civil unrest at the very least and all out civil war at the very best.

What is so alarming and has many Americans on edge is the type of weaponry and ammunition they have purchased; in particular 450 million rounds of hollow point bullets.

Hollow point bullets for those who are not familiar with them are very different than regular bullets, or what are called full metal jackets. Hollow point bullets are designed to fray or fragment upon impact. Regular bullets when they hit their target make a smaller hole but for the most part stay in one piece. Hollow points do the exact opposite. When they hit their target they create substantially more damage by fragmenting on impact.

When questioned by members of Congress as to their motivations for such ammunition purchases a DHS spokesperson said they were purchased for “training exercises” at the Federal Law Enforcement Training Center in Artesia, New Mexico.

When pressed further on why DHS has purchased and continues to purchase massive quantities of weapons and ammunition there answer was also one to be desired. The best they could come up with is buying so many in bulk allows for them to get better pricing.

It doesn’t stop there.

They have also purchased 2,700 armored tanks that are designed to withstand ballistic arms fire, mine blasts, and improvised explosive devices. These tanks were not ordered to be used on the battlefields of Iraq or Afghanistan. These tanks were ordered to be used on our city streets and in quiet towns all across America. In fact, many Americans have already spotted them in their neighborhoods.

Here is a partial list of their purchases since 2012:

450 million rounds of 40 caliber hollow point bullets, 175 million rifle ammunition rounds .233 caliber (the same ones used by NATO forces), 7,000 fully automatic assault rifles, (you know, the same ones Dianne Feinstein and the Obama Administration are trying to ban), and so far over 2 billion with a capital B in total rounds of ammunition.

So now that we have the facts let’s discuss the possible reasons for all this provocative behavior by our government. You don’t have to be a Republican or a Democrat to know that Barack Obama is a big government liberal. In fact, he is so far to the left he makes Jimmy Carter look like Ronald Reagan. Never in our nation’s history have we seen a more radical President.

The first thing any good leftist leader does when they come to power is try to get their military to go along with their agenda. If they find any major resistance to what type of change they are trying to implement they will usually resort to minimizing their strength or neutralizing it by creating a more loyal parallel force. Barack Obama’s goal has always been to create a loyal civilian army to help implement his type of transformational change.

In July of 2008 Barack Obama said, “We cannot continue to rely on our military to achieve the national security objectives we’ve set. We have got to have a civilian national security force that is just as powerful, just as strong, and just as well funded.”

We already have a civilian force Mr. President; it’s called the National Guard.

Zombie-like salivating yes we can sheeple will have you believe that the President wants to create a civilian army to help fight terrorism. The non kool-aid drinking folks on the right and many in the middle understand this is not the President’s true intent.

First off, the American military is the most powerful, most tactical, and well trained fighting force in the world. Our military is more than capable of fighting terrorism and doesn’t need a bunch of Communist radicals with Billy clubs and switchblades running around the country pretending to be patriotic freedom fighters. The only thing this coalition of Obama supporters would be terrorizing are the people that didn’t follow the President’s orders, mainly Conservatives.

Many fear that this may have been this administration’s goal all along. History has shown that during periods of major civil unrest and forcible revolutionary change many governments prepare themselves by insulating and arming their leaders while simultaneously depleting the resources of their adversaries.

So how do you make your resisters less resistant?

By purposely buying up as much ammunition as you can. Then you make sure law abiding citizens do not have access to ammunition they will need to defend themselves. Additionally, you make sure that local police departments sworn to protect and to serve their citizens suddenly do not have the tools needed to do so. Last but not least you strategically exploit a tragedy like the Sandy Hook Elementary School Shooting to pass draconian legislation that restricts the Second Amendment under the guise of public safety.

If millions of ammunition purchases and thousands of tactical weapons don’t keep you up at night maybe unmanned aircraft capable of eliminating United State citizens will.

Drones have been typically used in the war on terror to eliminate potential terrorist threats in other countries. Both George W. Bush and Barack Obama have used these unmanned aircraft to kill many high profile targets such as former Al-Qaida leader Abu Musab Al-Zarqawi in Iraq; and American born cleric Anwar al-Awlaki in Yemen. This type of aircraft is highly effective at eliminating specific targets while creating very little in collateral damage.

Our government would never use these types of weapons on American soil to eliminate American citizens would they?

On March 5, 2013 Attorney General Eric Holder actually said this, “Drone strikes against American citizens on US soil are legal.” He actually uttered these exact words from his lips. This should make every single American very nervous, especially the ones who vehemently disagree with this administration.

After Senator Rand Paul’s filibuster, Eric Holder sent him a letter backtracking from his statement. The fact that he said it at all is what is so scary. This administration could and would still use drones against Americans citizens regardless of what the attorney general says.

After more questioning and pressure from some members of Congress to clarify his prior statement Eric Holder than went on to say, “Using lethal force against American citizens on US soil is highly unlikely. We hope no president will ever be faced with that decision. However if there was an imminent threat such as a domestic terror attack on the country similar to a Pearl Harbor or 9-11 it is conceivable that the use of an unmanned aircraft could be used as a viable option.” That sounds like a whole lot of wiggle room to me.

Suppose the President is walking from his motorcade one day to the White House. He is surrounded by his security detail and the Secret Service. There is a sniper within range ready, willing, and able to take him out. The sniper is spotted and a drone is dispatched to eliminate the threat. How is this legal? How does this even constitute as an imminent threat to the nation?

Whether or not we as Americans wake up one day and find out that the President is no longer with us doesn’t constitute as a national emergency or an imminent threat. Did the world stop when John F. Kennedy was assassinated? Did time stand still when Ronald Reagan was shot? None of these events stopped the country’s everyday routines and if these events should transpire once again in the future nothing will change how we live our daily lives.

Our Constitution was set up this way. We have a line of succession when it comes to events such as assassinations. The American people will go on with their lives and the Vice President will take over.

Our Attorney General says it is legal to kill American citizens on American soil. Barack Obama has cut the military and wants to reduce our nuclear weapons capability even though many rogue nations want to destroy us. Barack Obama wants to create a 1 million member strong civilian security force to “help defeat terrorism”. DHS has refused to answer questions under oath in judiciary hearings as to the intent of their purchases, only giving lame excuses such as training and bulk pricing discounts. And finally the Democrats in Congress and the Obama Administration are trying to strip law abiding citizens of their right to protect themselves by undermining the Second Amendment. Even Stevie Wonder can see what is happening.

So what do we do?

If our government is going to make provocative purchases over and over without reason or explanation I suggest we prepare for the worst and hope for the best. I would implore all Americans if they haven’t done so already to exercise their Second Amendment rights.

I think it is time for all Americans to purchase as many firearms as they can get their hands on. Handguns, rifles, assault rifles, M-16’s, hunting rifles, shotguns, carbon rifles, AK 47’s, Mac 10’s, etc.

If most Americans decided to “arm up” than maybe our government will see that as a deterrent. We need to neutralize the potential threat from this administration by showing them we are not going to go quietly into that good night. We need to make sure that our government knows that if they decided to travel down this road that we the people will guarantee it will be a very bumpy ride.

Suggested by the author:
www.joshbernsteinpoliticalwriter.com[2]
Dismantling Washington
Dreams from my surrogate father
URGENT: How to beat Barack Obama’s executive orders on gun control
How the left uses identity politics and fear tactics to influence voters