Colorado’s Kelley Johnson presented a thoughtful monologue about nursing during the talent portion of Miss America, and the haggard hosts at The View mocked it to the point that two major companies pulled their ads[1]. The View then offered what seems to be a totally insincere apology in hopes to lure ad buyers back. 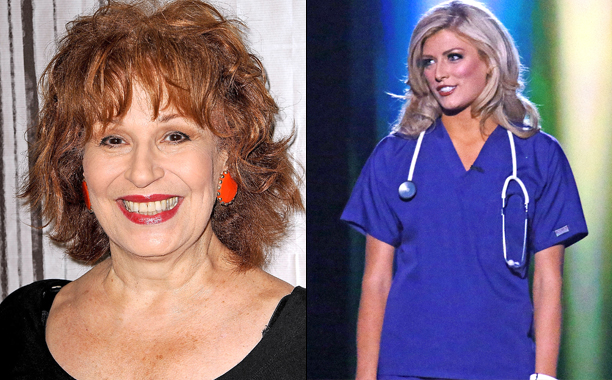 Healthcare provider Johnson & Johnson said Wednesday that it would pull its ads, at least for the time being….Eggland’s Best was the second advertiser to announce on Facebook its departure from “The View” over the controversial remarks.

The #NursesUnite because Joy Behar’s future diaper is a messy one. Not sure who will change that later, because she’s not far from depending on one after blasting nurses for no reason.

Comedian Nicole Arbour was interviewed on Opie Radio and claimed that off camera, the hens still mocked the profession, thus verifying how fake the apology was. We all know it was fake. Anytime you apologize right after a major ad buyer leaves, your apology is simply to pull the ad buyer back. It’s like kissing a girl who isn’t your wife, then apologizing and saying “she kissed me, but I didn’t kiss back” and you know darn well it’s fake apology. You just want your ad buyers and wife to forgive you.

The hens reportedly said that nurses are “wannabe doctors.” Well, they’re not wannabe doctors. If they wanted to be doctors, they would’ve just became doctors. Just like teachers aren’t wanna be principals. Not everyone wants that particular job.

Maybe the ladies on The View are “wannabe entertainers” because I think it’s one of the worst shows in history. It hurts my ears.