Yvonne/Yvette (real name Yvonne, goes by Yvette) Felarca has gotten into trouble with the law again. Considering the over-the-top hypocrisy that characterizes fascistic antifascists, she picked the right spot to get busted for brawling:

A middle school teacher-turned-Antifa leader was among the four people arrested after opposing political groups clashed Tuesday inside a so-called “empathy tent” at the University of California, Berkeley.

Yvonne Felarca, a 47-year-old teacher at Berkeley’s Martin Luther King Jr. Middle School, was charged with battery and resisting arrest after a scuffle broke out at rally held in response to student organizers canceling a planned “Free Speech Week” that would have featured right-wing firebrand Milo Yiannopoulous.

Three men were also arrested on charges including possession of body armor, carrying a banned weapon and participating in a riot.

As for the site of the brawl,

The empathy tent was reportedly in place to offer protesters a calm place to unwind amid the chaos around them. But the tent ultimately offered little respite – and nearly toppled during clashes between conservative students and leftist activists, the Los Angeles Times reported.

“It’s tough, but we do what we can to foster dialogue,” said Edwin Fulch, who reportedly used the tent for talks about the virtues of meditation and the Occupy Wall Street movement.

Felarca is the leader of the Antifa sect By All Means Necessary (BAMN), an overtly Marxist outfit with ties to NAMBLA. Political “dialogue” with this crowd generally requires stitches. That this maniac has been teaching in a public school is neither reassuring nor surprising. 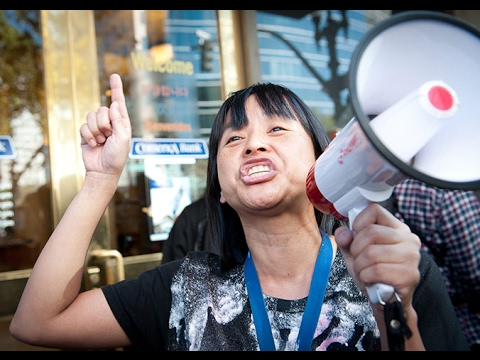 On a tip from J. Hat tip: Legal Insurrection. Cross-posted at Moonbattery.