Portland’s Rose Festival Canceled Due to Threat of “Antifascist” Violence

Moonbats are feeling their oats, now that Berkeley has granted them the power to cancel any speaker who does not conform to their ideology simply by threatening violence. Further up the Left Coast:

For 10 years, the 82nd Avenue of Roses Business Association has kicked off the city of Portland’s annual Rose Festival with a family-friendly parade meant to attract crowds to its diverse neighborhood.

Set to march in the parade’s 67th spot this year was the Multnomah County Republican Party, a fact that so outraged two self-described antifascist groups in the deep blue Oregon city that they pledged to protest and disrupt the April 29 event.

Even in Portland, Republicans are part of the diverse community too. They have been marching in the parade for years.

Antifa fascists back up their crybully outrage with physical threats. An anonymous email was sent:

“You have seen how much power we have downtown and that the police cannot stop us from shutting down roads so please consider your decision wisely,” the anonymous email said, referring to the violent riots that hit Portland after the 2016 presidential election, reported the Oregonian. “This is nonnegotiable.”

True enough, there can be no negotiating with terrorists or fascists, I mean, “antifascists.”

“We will not give one inch to groups who espouse hatred toward LGBT, immigrants, people of color or others,” it said.

To “espouse hatred” toward groups regarded as sacred by liberals, all you have to do is fail to be on board with the leftist agenda. All Republicans by definition “espouse hatred.”

On Tuesday, the business association buckled, announcing it would cancel the parade altogether.

The moonbat sects Oregon Students Empowered and Direct Action Alliance were both community organizing mayhem to disrupt the festival; both deny sending the email.

The totalitarian “tolerance” of the Left means nothing happens until it has been purged of any trace of resistance. 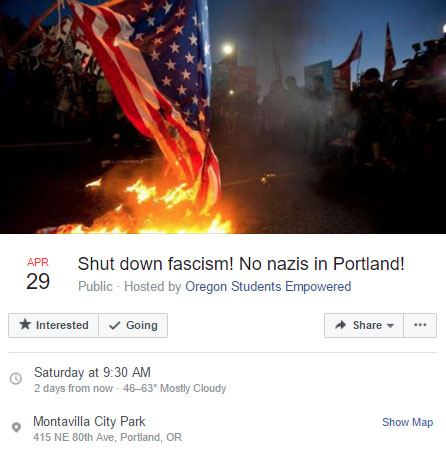