If it is the constitutional right of knuckle-dragging Black Lives Matter types in the NFL to make public pageants of their hatred of America while they are on the job, as David French avers, then it could be the First Amendment right of a guy who calls himself “Shirley” to take a dump in your front yard:

A man claiming to be the “spokesman” of a jogger dubbed the “Mad Pooper” – who reportedly has been defecating on the lawns of Colorado homes – says the woman [sic] is struggling after gender reassignment surgery and as she [sic] battles a traumatic brain injury. …

He said he was speaking on the behalf of Colorado Springs jogger “Shirley” and said she [sic] is sorry for her [sic] actions. The man also said “Shirley” can no longer control herself [sic] after undergoing the reassignment surgery.

What kind of transphobe would object to Squirrelly fertilizing their yard? 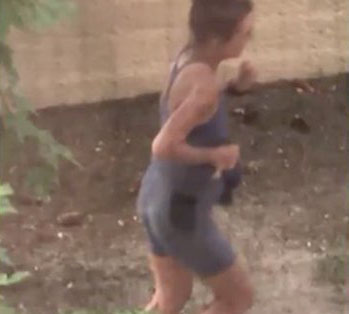 There goes Squirrelly the Mad Pooper.

On tips from Varla and J. Cross-posted at Moonbattery.