A Short “Man Of Steel” Review + Is Superman a Jesus Allegory?

Most of the Superman movies up until now have been pretty bad and none of them have been in the same league as the top-of-the-line super-hero movies like The Dark Knight, Spider-Man or Iron Man. Even though Superman is one of the best known comic book heroes, it’s almost understandable that the movies haven’t been that great. After all, how do you center an entire movie around a nearly invincible goody two shoes? He’s not edgy like Batman or Wolverine, not charming and erratic like Iron Man and he’s no ordinary, easy-to-relate-to hero like Spider-Man. His most famous opponent? It’s Lex Luthor, which is like having a Lion whose arch-enemy is a mouse. 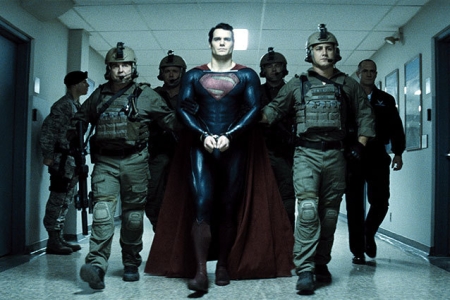 So, how do you turn that into a great movie?

He started by finding a way to humanize a nearly indestructible space alien with stories about his childhood in Kansas. Little Clark was always the unliked outsider who felt odd, different and lost even though he almost couldn’t help but behave with honor, even towards bullies who didn’t deserve it. Kevin Costner did a magnificent job of playing Clark Kent’s father and had some wonderful scenes with his very special adopted son.

Additionally, I’d heard that Warner Brothers was selling this movie hard to Christian groups and guess what? This is actually a fantastic movie for Christians. Just as Aslan from The Lion, the Witch and the Wardrobe was a “Jesus allegory,” Superman is as well. Although atheists will hate this statement, if human beings had envisioned what they want Jesus to be, it would essentially be Superman in this movie — a fighting savior who’s willing to sacrifice himself for mankind.

Beyond that, the acting was superb, there were some really touching moments, the action was terrific and special effects were magnificent. In fact, the only two significant flaws in the movie were that the 2nd half of the film wasn’t paced as well as it could have been and near the end, Superman was put into an extremely difficult situation and did something that was very out of character for him. The movie handled it about as well as it possibly could have, but again, it was just so jarringly “not Superman” that it detracts a bit from the film.

All that being said, this may be the first film that I go to see in the theater more than once since 300. Congrats to Zack Snyder, Henry Cavill (Superman), Amy Adams (Lois Lane), and Kevin Costner for finally giving comic book fans the Superman movie that they deserve.