Rapper Eminem Tells Fans: Decide Whose Side You’re On, If It’s Trump’s ‘F***k YOU!” [VIDEO] 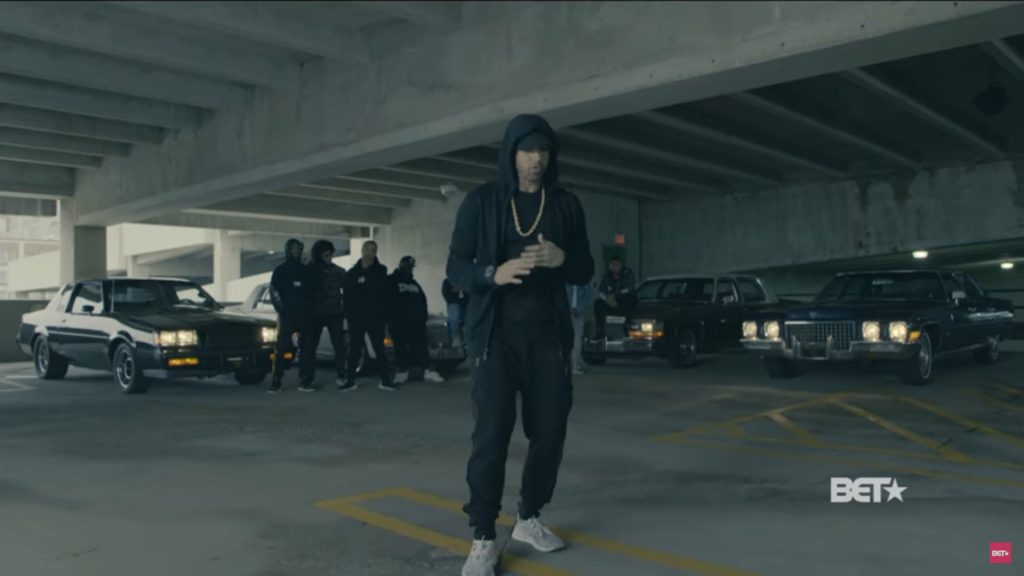 Eminem, 44, has graduated from songs about his mother’s drug use into the world of political commentary. God help us all.

In a video that was first shown at the Black Entertainment Television Hip Hop Awards, the white Marshall Mathers spoke about Breitbart’s Steve Bannon, football’s Colin Kaerpernick and any of his fans that voted for President Trump.

This is a “freestyle cypher,” which is a term I have no problem in confessing that I had to look up. A cypher is a cyclic form of rapping where you are constantly being interrupted. To be clear, we’re not talking Miles Davis levels of jazz improvisation. These are guys pretending that their pre-canned lyrics:

“From his endorsement of Bannon, support for the Klansman, tiki torches in hand for the solider that’s black and comes home from Iraq and is still told to go back to Africa…”

…are coming into their heads at the time of filming. Somehow I don’t believe Eminem has spent enough time reading about Steve Bannon or his dynamic in the White House to be qualified to rip on him.

The year is 2017 and famous rappers are dissing magazine editors. He’s also rapped about sexually assaulting Ann Coulter[2] though, so maybe he’s a secret right-winger who’s been reading our favorite authors for years.

His work with Dr. Dre was catchy and original, so it hurts to see Eminem go from fun lyrics to rapping about how he doesn’t like the guy who won the last election. Political commentary is for rock, punk and obnoxious folk music. Hip hop is about money and women.

Donald Trump’s name started popping up in hip hop during the 1980s, starting with the Beastie Boys. He has been both praised for being wealthy and also mocked. In 2011, rapper Mac Miller released a song called Donald Trump and Trump recorded a video for YouTube that congratulated the rapper on the song’s success, but said, “Maybe you should pay me a lot of money, but it just did over 20 million people, tuning into Mac Miller.” He said that while he’s proud of him, he said he hasn’t watched the video or heard the song or read the lyrics and said that it’s probably “not the cleanest language you’ve ever heard.” In 2013, Trump went after him on Twitter, calling him an ungrateful dog who is going to be taught a “big boy lesson about lawsuits and finance.”

Little @MacMiller[3], you illegally used my name for your song “Donald Trump” which now has over 75 million hits.

However, by 2015 Trump backed off and again praised the song as it reached 100 million views.

Here’s the video of Eminem “Ripping Donald Trump” in “Freestyle Cypher,” currently with over 4.4 million views and climbing.