FIGHT! Nancy Pelosi’s Out Of Control Daughter Leaves Fox Host Ticked Off Over Her “STUPID” [VIDEO]

And here we go again…[1] this is the same kind of crap that Kurt Eichenwald of Newsweek[2] pulled on Tucker Carlson last week. These people must be trained to evade questions like this. Fox News Business host Maria Bartiromo (one of my favorites) interviewed Christine Pelosi… yes, that Pelosi. She’s an elector and Maria wanted her to admit that Hillary Clinton lost the election all by her lonesome and that the Russians didn’t lose it for her. Pelosi rambled and talked over Maria and never answered the fricking question. No wonder Maria got ticked. I know I would have.

Pelosi smeared conservatives over Pizza-gate (non-sequitur) and over falling for Russian propaganda. Let me tell you something… the Russians have been doing this kind of spy-craft to us during elections for decades. I know, I research it. But the Russians didn’t get Trump elected. Americans fair and square elected Donald Trump because they could not stomach someone as corrupt as Hillary Clinton. What is so damned hard to understand about that? 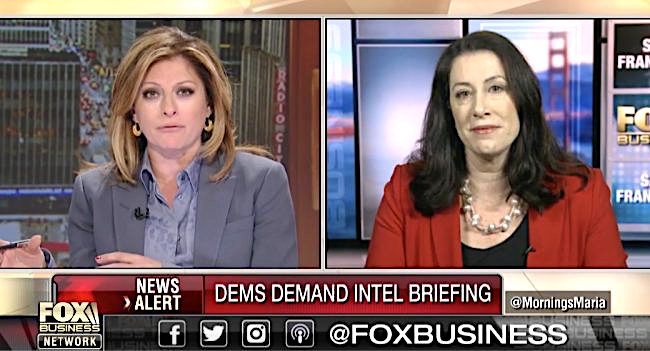 It wasn’t so much an interview as it was a verbal car crash between Fox News Business host Maria Bartiromo and Democratic elector Christine Pelosi.

While Bartiromo was trying to keep Congresswoman Nancy Pelosi’s daughter in her own lane, Pelosi turned left and put her foot squarely on the gas and sped through all of her it’s-all-Russia’s-fault-Hillary-Clinton-lost-the-election talking points she could cram in before yielding to the host.

As Bartiromo tried to get Pelosi to admit that her candidate, Hillary Clinton, lost the election on her own merits, Pelosi kept talking and wouldn’t stop to let Bartiromo get in a question.

At one point, the Fox Business host cupped her hands to her face and said, “Yoo hoo, Christine!” in an unsuccessful attempt to get her guest’s attention:

But, as the moments ticked by and the admonishments by Bartiromo to please not talk over her went unheeded, the Fox host plaintively appealed to Pelosi to please respect the audience and at least answer her questions:

“Christine, you’re killing me. This interview is about to be over and you’re not going to have gotten anything done on television.”

You’ve got to give it to Maria… she nailed this idiotic leftist. During their ‘fight’, Bartiromo alleged that Pelosi’s behavior was akin to giving the middle finger to the viewers at home. She added, “You’re basically blowing off the audience!” and “It’s so rude to talk over someone else.” Bartiromo continued hammering Pelosi. “You’re basically saying ‘I don’t care about the audience,’ and that’s what you said to the voters as well.” And the coup de grace: “I think you just told the audience why she lost the election, Christine. Because she had no plan and…unfortunately it feels like sour grapes.” Bingo! Yahtzee!!

Christine Pelosi is leading the effort to get access to intelligence briefings for the electors before Monday, when they will meet to formally elect the President. It is my understanding that was already shot down. These trolls won’t stop Donald Trump from becoming the 45th President of the United States. The DNC and Podesta leaks are deeply embarrassing to the Democrats… but that didn’t decide the election. It merely exposed the truth and corruption of the left. Hillary Clinton lost because she sucks, is corrupt and is incompetent.