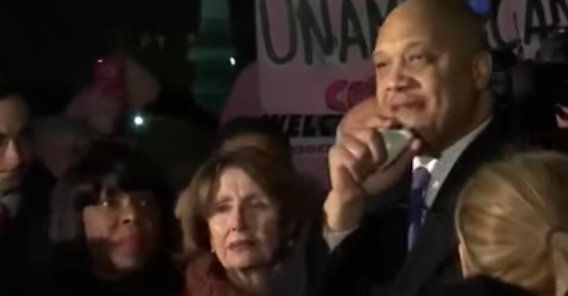 Donald Trump’s recent move to stop visas to seven nations deemed too dangerous has people upset, especially on the left. This left minority house leader, Nancy Pelosi, to speak out with Democrat Rep. Carson. And honestly, it is almost comical when you hear her in the background smiling through her teeth while continuing to give him directions.

Frankly, the concerns with this new order and its implementation are not limited only to liberals. Many conservatives have found themselves deeply concerned and disturbed by the temporary ban and the longer lasting ban of Syrian refugees. Many feel that the vetting process is already sufficient enough. Donald Trump has also limited the number of refugees allowed into the country by more than half the annual allotment.

But this transcript leaves no doubt that people like Rep. Carson are just pawns.

CARSON: Not only do I represent Indiana’s seventh congressional district very proudly, but I happen to be a Muslim and a former police officer.

Anyone else a little disturbed by the way that Nancy Pelosi can smile while talking through her teeth and pushing her agenda? It is more than a little troubling.