Welcome to another Nancy Pelosi brain freeze episode. There is something very wrong with this woman. I have seen her in numerous scenarios now where she goes blank and can’t remember what she is saying. In her latest press conference, she has a couple of spastic facial spams, that lost blank stare and a look of absolute confusion on her face. If that’s not bad enough, the woman looks cadaverous… like she’s on death’s proverbial doorstep. She can’t keep track of what she is saying one second to the next. I seriously wonder if she is suffering from Alzheimer’s or Parkinson’s. Something medical is going on here.

“What an event-filled morning has been,” Pelosi stuttered as she began to address reporters. She stumbled over the first words out of her mouth. The Democrats keep her as their leader because she’s female and because she’s been there forever. Literally it seems. Now they are panicking and with good reason. Her mumbling was just getting started. It got much worse from there on in. “Really one that, uh, marks a transf— for—” she said, before staring at reporters barely 10 seconds into the appearance. Then she finally said, “transformative moment…” 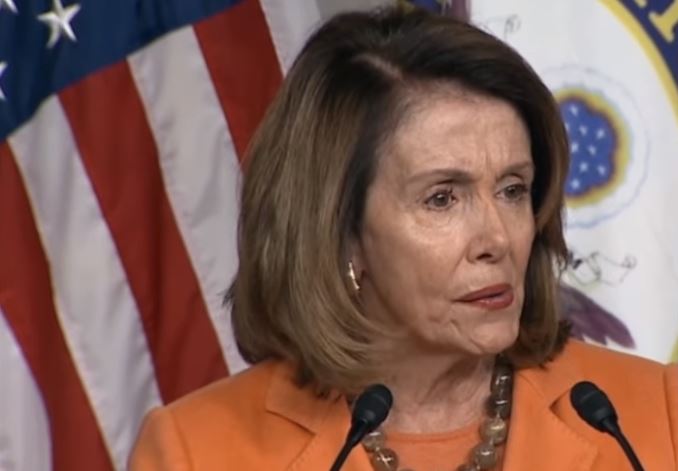 I swear if Pelosi wasn’t such a powerhouse at raising funds for the party, she would have been toast long ago. In her current state, the woman can no longer lead the party. She’s not well and she can barely function and communicate at all. She acts like her wiring is defective. While mumbling about George W. Bush leaving a deficit… she mistakenly said ‘trillions’ instead of ‘billions’. “When President Bush left office the deficit was 1.4 trillion,” she said as she suffered an apparent facial spasm, “uh, trillion dollars. So you’re talking about an enormous amount of money. The national debt increased by an enormous amount — the debt was 1.4 billion in terms of the deficit.”

If she wasn’t such a raving, evil moonbat, I’d almost feel sorry for Pelosi. You would think someone in her party would be ringing the alarm bell over her appearance and actions. Many people have noticed it now. It’s a truly embarrassing end to her political career and she’s fast becoming a walking, talking joke. But it does explain why things are so screwed up in DC. Its filled with old power mongers who refuse to let go, even after they go senile.

“This is about the American people and how policy here affects them,” Polosi robotically stated. After staring and murmuring something unintelligible, she then blurted out “low,” before continuing, “instead let’s go to the table…” As she was answering questions from the press, you couldn’t understand a damned thing she said. It was utter gibberish. “We’re here for the American people…” Just seconds later, she said, “Education being essential. Education, by the way, being any money being spent on education that—” and then stared blankly at reporters before ending off.

When Pelosi said “declaring an emergency,” she suffered yet another facial spasm. Has this woman had a stroke? I just have to ask because the vacancy behind her eyes and the lack of control of facial muscles is indicative of it. She slurs her speech as well. Someone should find out what kind of meds she is taking. Pelosi then had another brain freeze before slurring, “House and Senate, Democrats and Republicans and the White House, as to uh— what— when that will happen.” She tried to say “continuing” after that, but it came out wrong. She ended just as badly as she started, “It has to happen soon so that we can have it done, uh, by the um— the end of the— con— ca— uh, the continuing resolution.”

I think it is way past time for Pelosi to step down. She’s going to try and hold onto power until she drops dead. By the look and sound of it, she’s on speaking terms already with the Grim Reaper. Pelosi looks like the walking dead shambling into senility. Just awful.