Pelosi Tells Trump To ‘Grow Up’ – Immediately Gets Nailed For Hypocrisy 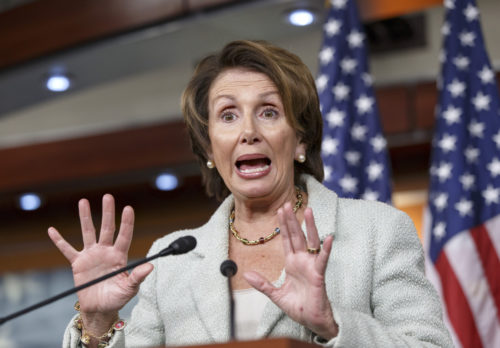 In a burst of characteristic petulance, House Minority Leader Nancy Pelosi lobbed a round[2] at President Trump, referring to him as immature and accusing him of engaging in feelings when he stated that Obama’s administration had electronically listened in on him or his campaign. That’s right, Pelosi asserted via Twitter that the President “cannot be allowed to feel…” Well, Ms. Pelosi, this may come as a shock to you, but anyone is allowed to feel whatever they want. And isn’t it just like a Liberal to talk about how someone “cannot be allowed…” Liberals are always telling everyone what they can and can’t do. It’s a basic tenet of the Left that the goal is to control others. In her tweet she said, “Let’s just grow up. President Trump cannot be allowed to feel as if he can simply say whatever he wants, despite a lack of evidence.”

Let’s just grow up. President Trump cannot be allowed to feel as if he can simply say whatever he wants, despite a lack of evidence.

But Twitter had something to say about her remark. Many folks came right back at her with her own hypocrisy.

Hi @NancyPelosi[4],
'Member that time you were outraged at Harry Reid for accusing Romney of not paying taxes without evidence? Me neither! pic.twitter.com/bBpz8WkR0N[5]

Of course it may have slipped her mind that Trump is the President. And that he has yet to be proven wrong on a single accusation. Time will tell on this one too. But he usually has evidence. We will all wait and see. And if he does produce evidence of the Obama administration’s electronic spying on him or his campaign, Pelosi will have some backpedaling to do.

It’s always a good laugh when the Left tries to call other people immature. They can’t even have a discussion without getting mad and calling people names. Now who’s immature?