WATCH: Woman Whose Son Was Killed By an Illegal Confronts Nancy Pelosi

House Minority Leader Nancy Pelosi will stop at nothing to protect the hordes of illegal aliens in the United States, even if it includes lying to a mother whose son was murdered by one of Pelosi’s beloved “undocumented immigrants.”

Laura Wilkerson recounted the horrifying events that led up to her son’s brutal murder, only to be admonished by the very woman you would expect to be on her side. 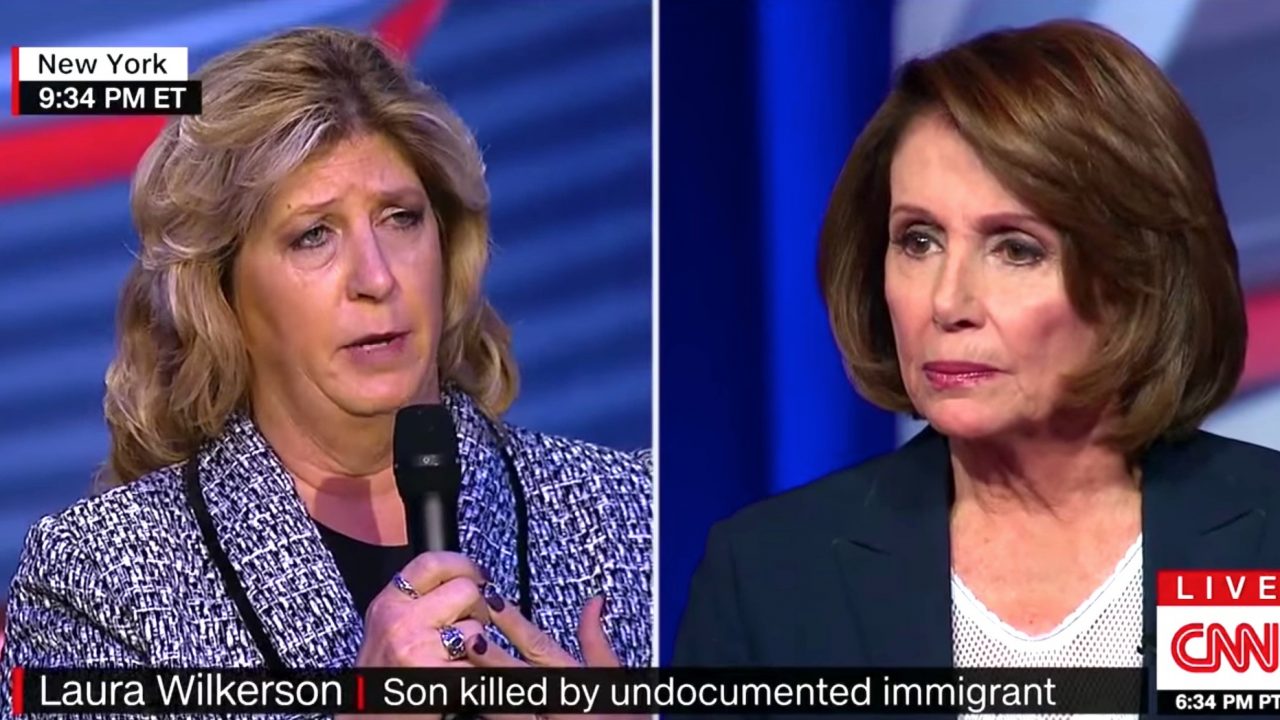 Pelosi represents a district in San Francisco, one of the many cities which have adopted “sanctuary city” policies that protect illegal aliens from federal law enforcement requesting help from local authorities.

The question came from Laura Wilkerson, who tearfully recounted what happened to her son.

“In 2010 one of the illegals slaughtered my son,” she began. “He tortured him, he beat him, he tied him up like an animal. And he set him on fire. And I am not a one-story mother. This happens every day because there are no laws enforced at the border.”

“How do you reconcile in your head about letting people disavow the law?” Wilkerson continued. “The second part of my question is this: If you need to go home tonight and line up your babies as you say, and your grandbabies, which one of them could you look in their eyes today and tell them that they’re expendable for another foreign person to have a nicer life? Which one would you like to say ‘You, my child, are expendable for someone else to come over here and not follow the law, and have a nicer life’?”

“I commend you for sharing your story,” Pelosi answered. “I can’t even imagine the pain. There’s nothing, I’m sure, that can compare to the grief that you have, so I pray for you.”

I pray for you, again, we all pray that none of us has to experience what you’ve experienced. So thank you for channeling your energy to help prevent something like that from happening, but I do want to say to you, that in our sanctuary cities, our people are not disobeying the law.

These are law-abiding citizens. It enables them to there without being reported to ICE in case of another crime that they might bare witness to.

“The point is that you do not turn law enforcement officers into immigration officers,” Pelosi concluded.  “That is really what the point is in a sanctuary city. So it’s not a question of giving sanctuary to someone who is guilty of a crime — they should be deported.”

Except you literally are giving sanctuary to people who are guilty of crimes, because breaking into America is a federal crime! The fact that they are here illegally and given refuge by you is a huge problem, but the fact that you looked this grieving woman in the face and say “We’re not going to punish these illegals until they kill someone, or rape someone, or otherwise commit a crime that we deem abhorrent enough,” is beyond my comprehension.

For all the smack they talk about wanting to “protect the children,” their actions prove that American children only matter until another “protected class” moves into the equation.

Watch the disgraceful video below:

Pelosi speaks with the mother of a child killed by an undocumented immigrant https://t.co/SAXdOA1iMz[3] #PelosiTownHall[4] https://t.co/oEXww222F4[5]